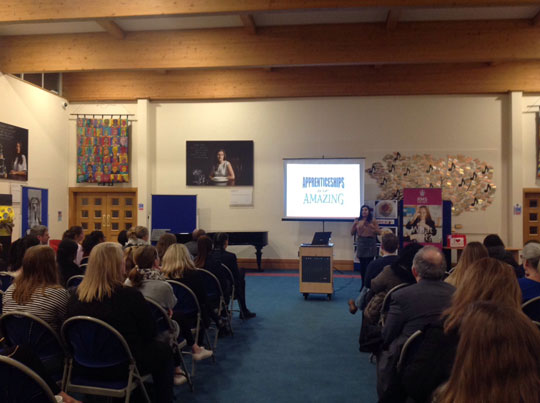 On Tuesday 5th February RMS hosted its first Apprenticeship Evening, organised by Head of Careers Mrs Isherwood and led by Trisha Seecharran, from Education and Employers – a charity that works to promote links between employers and schools.

One of the aims of the evening was to bust some of the myths that unfortunately still surround apprenticeships, and to show how an apprenticeship can be an excellent launching point in one’s career, earning money with the possibility of gaining a degree at the end of it.

The evening began with a fact-filled presentation from Trisha Seecharran, summarising the apprenticeship landscape in 2019, with a particular emphasis on those that can lead to degree qualifications.

Trisha explains what apprenticeships are and the different types on offer…..learn while you earn pic.twitter.com/F0l5AhlWvN

This was followed by speakers from a variety of companies and organisations, describing what their schemes offer, including TfL, Mars, West Herts College, Fujitsu, and Gratte Brothers.

One of the speakers had started out as an apprentice at Mars, and chosen to stay with the company after qualifying; he gave a great insight into life as an apprentice, and how it compares to alternative career paths.

Open to parents of Senior School pupils, and students themselves from Year 10 upwards, the evening was a great success with nearly 100 attending overall.

Some more photos of the Apprenticeship Information Evening so far… pic.twitter.com/9iFd2IlRdO