Welcome to the History of RMS. Please read on to learn about how we started, our traditions and key moments in the life of the school.

RMS is one of the oldest girls’ schools in the country. Founded by Chevalier Ruspini in 1788, the School's original purpose was to educate the daughters of Freemasons who were unable to support their families through death, illness or disability.

This documentary dates from late 1940’s, probably 1949 and explains the life of the girls at Rickmansworth.

The clothing worn by the girls shows dresses and collars with panama hats. There are clips of the operating theatre, dentist and optician in the Sanatorium complete with the matrons’ headdresses and flowing aprons, workers in the walled kitchen garden harvesting the fruit and vegetables, and the hard work carried out by the laundry staff. Miss Vickridge is seen teaching French, Miss Newnham, Housemistress of Alexandra House, teaching Geography, and Miss Funnell, who for many years was Housemistress of Atholl, is seen teaching the Art class. For those reminiscing about the dormitories in the boarding houses, there are good shots of these along with the wardrobes by the door. The dining room, with its original long tables and sung grace offers a glimpse of the formality of the dining room. The Masonic pride for the provision being offered here is tangible.

This is a delightful documentary of life at the School during the 1960’s.

The uniform has changed but much of the daily life stays the same. There is a wonderful insight into Sports Day on the Lowers complete with races involving sacks, carrying a cup on your head and eating something off a plate with no hands, walking on flowerpots and Lady Harris handing out the prizes from the pavilion steps. Hats are still being worn but the atmosphere appears to be great fun and very competitive!

There is a fabulous clip of a girl being taught to drive in the grounds in the School’s mini, lacrosse and hockey on the Uppers and even a golf lesson! You can see the tiered Geography room on the top teaching corridor made famous by the film, Raiders of the Lost Ark, pet rabbits and hamsters, visits to Windsor and London and a very early aerial clip of the School.

The documentary ends with one of the students being taken to Selfridges in London to buy her leaving suit.

This documentary was made post 1970 which was the year that the circular library, now called the Resource Centre, was opened, and most likely in 1977 the year that Virginia Wade won the Wimbledon singles title.

There is a brief history of the School at the beginning and some good views of the covered walkway and the Science block.  Domestic science and sewing are well documented  The School seems to have taken quite a sizable step towards a more modern way of working with girls allowed to be more carefree, with a clip of a girl being pulled along one of the paths across the Garth at some speed while on roller-skates.
There is a lovely view of the lake on the Lowers complete with swan and some lovely coverage of a swimming gala showing the diving boards at the far end.

This film shows the visit by Her Majesty the Queen to RMS in 1955.

HM the Queen is met by the President of School (Earl of Scarborough.) and Chairman of House Committee (Major General Sir Allan Adair). Queen receives a bouquet from girl of the Junior School (Rosemary Kidson aged 8 years). Head girl – Sally Grantham – is introduced to Queen. The Queen then meets some of the male staff (engineers etc.), and visits the new Domestic Science wing. She then enters the Dining Hall and walks between tables whilst girls are at tea and talks to some of them. The Queen then stands on a dais in the Assembly Hall and is treated to a performance of the “traditional physical fitness drill” (commonly known as Drill). Headmistress, Miss Audrey Fryer announces Queen has asked for girls to have a day’s holiday, the girls cheer and clap.

RMS girls perform the School Drill three times a year. Imagine, 180 girls from the ages of 11-18 (with one exception) performing a twenty minute routine of calisthenics and marching to music with no spoken instructions. It is a stunning sight.

Swedish Drill was popular in schools in the 1880s and forms the basis of the RMS tradition which dates back to 1876. Today we are the only school in the country to perform this impressive routine and a place in the Drill Team is highly sought after by the girls. Their commitment and practice in search of perfection is admirable and they wear their Drill Team badges with enormous pride. The routine is based on height order and so each year the girls have to re-learn their part as their height, and therefore their position, changes within the team.

The one exception to the age of the girls taking part, as noted in the first paragraph, comes at the end of Drill when the youngest girl in the School walks alone to the front of the hall with the older girls following her in a protective formation as a show of support. It is a charming and moving finale to an otherwise dramatic spectacle.

School Drill is performed in the week leading up to Senior Prize Day in October, at Prize Day itself, and finally after the Service of Remembrance in November.

Far from being a regimented tradition in which the girls are forced to participate, this is a team event for which there is fierce competition to win a place.

The Ashlar is a ‘polished cornerstone’ and it is a traditional and valued award given as a silver badge to pupils in recognition of their hard work, demonstration of the school values, and contributions to school life.

The School motto “Circumornatae ut Similitudo Templi” comes from Psalm 144, “That our daughters may be as the polished cornerstones of the Temple.”

When a stone for the Temple was prepared by the builders, it was first chiselled into a rough cube, known as a rough ashlar. It was then the task of the more skilled craftsmen to form it into a smooth ashlar, fit to take its place in the walls of the Temple.  It is with enormous pride that we assist our pupils on their educational journey, helping them to learn personal and academic skills until they move onto the next phase of their careers as confident, thoughtful young women.

Pupils can earn an Ashlar at various stages in their school life, from the end of Year 10 through to the Sixth Form. Candidates for an Ashlar should demonstrate high standards in the following areas:

The Chapel at Rickmansworth Park is the first consecrated building in the School’s history. Prior to the School moving to Rickmansworth, the girls had always used local churches but they had never had their own Chapel. Consecrated in 1934 and built to seat 500 the Chapel was designed by John L Denman and built by Walter Lawrence.

The charming stained glass windows were designed and executed by Louis Ginnett, who also painted the murals. Joseph Cribb carved the stonework. Denman was a Brighton based architect and both Ginnett and Cribb were his contemporaries, living at the time in the Little Ditchling artistic community.

A statue of the school’s founder Chevalier Ruspini can be seen on the east elevation of the Chapel. This statue was originally at the School on its Clapham site. The carved ship over the west door is an ancient Christian symbol. It is from the Latin for ship (navis) that the word nave is drawn; Christian churches have a cruciform nave and transept as an integral part of their design and the RMS chapel is no exception. The carved peacock, representing eternity, also executed by Joseph Cribb, appears above one of the doors in the north elevation.

Part of the altar rails are a memorial to Lucille Williams, née Moignard, a former pupil of the School 1904-1913. A legacy of £300 from Capt James Renouf Williams, husband of Lucille, had been specified for prizes for domestic science in the name of his wife who had won a prize for cookery in 1913. The rules of the institution at the time meant that it was not possible to accept this legacy so it was altered to a gift of eight carved panels as altar rails. The panels were carved by Raymond Brothers of Yeovil, who started the work in 1961 and it was completed and installed by January 1962, to a design by John Denman.

The Memorial Cross, originally at the Royal Masonic School for Boys in Bushey sits proudly outside the Chapel on what is known as The Boys’ Lawn. Also from the boys’ school are The Lewis Stone, Chapel font and Memorial plaques from WW1 and WW2. 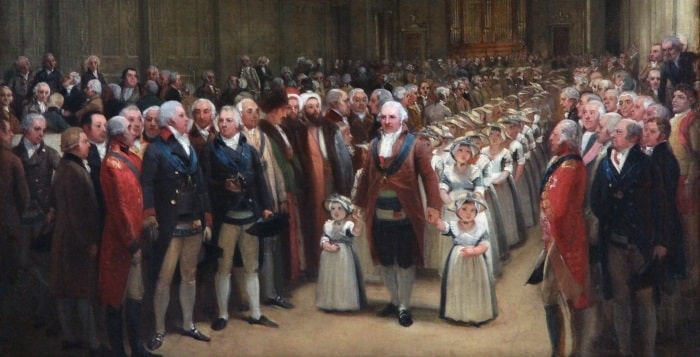 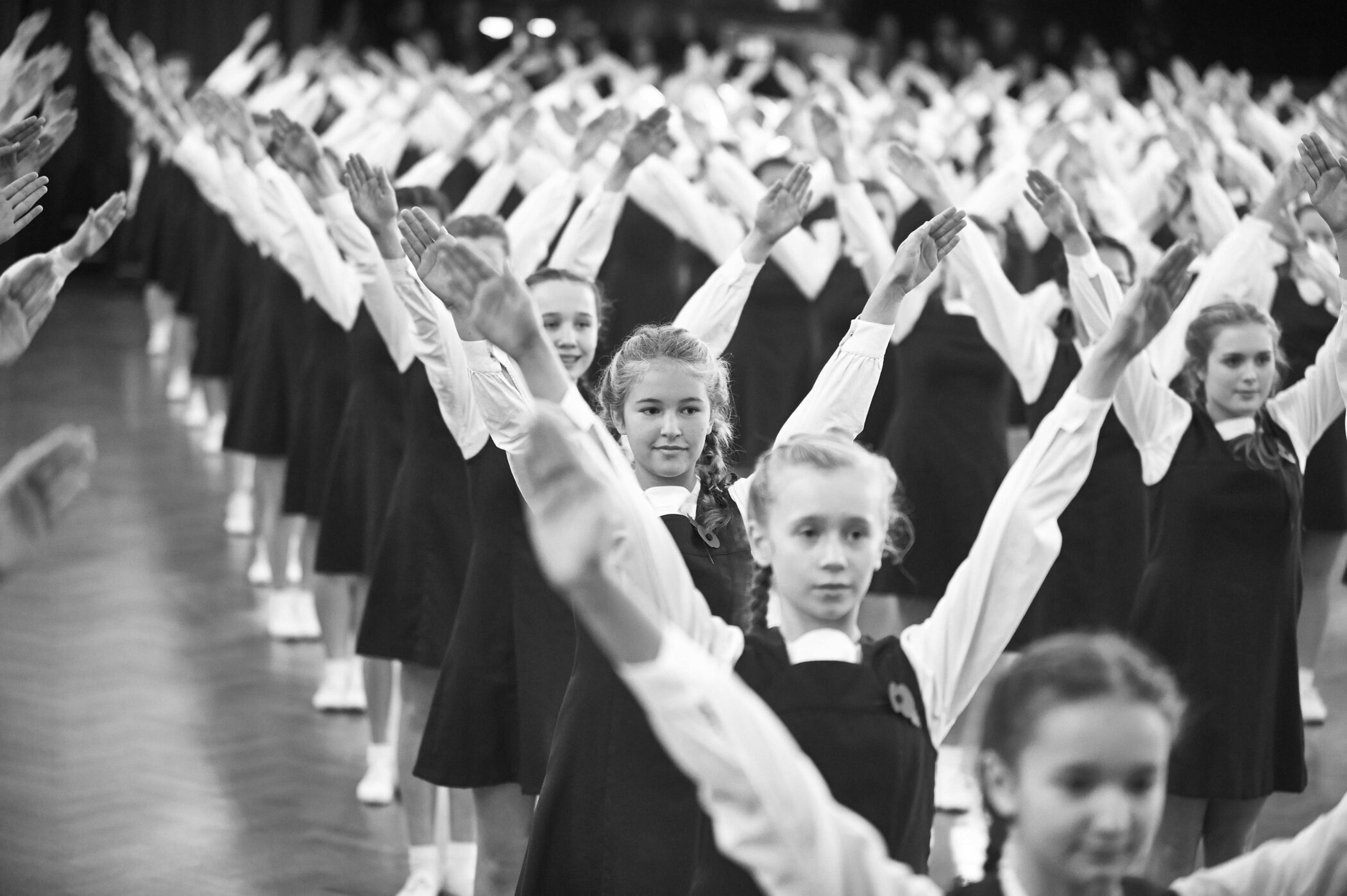 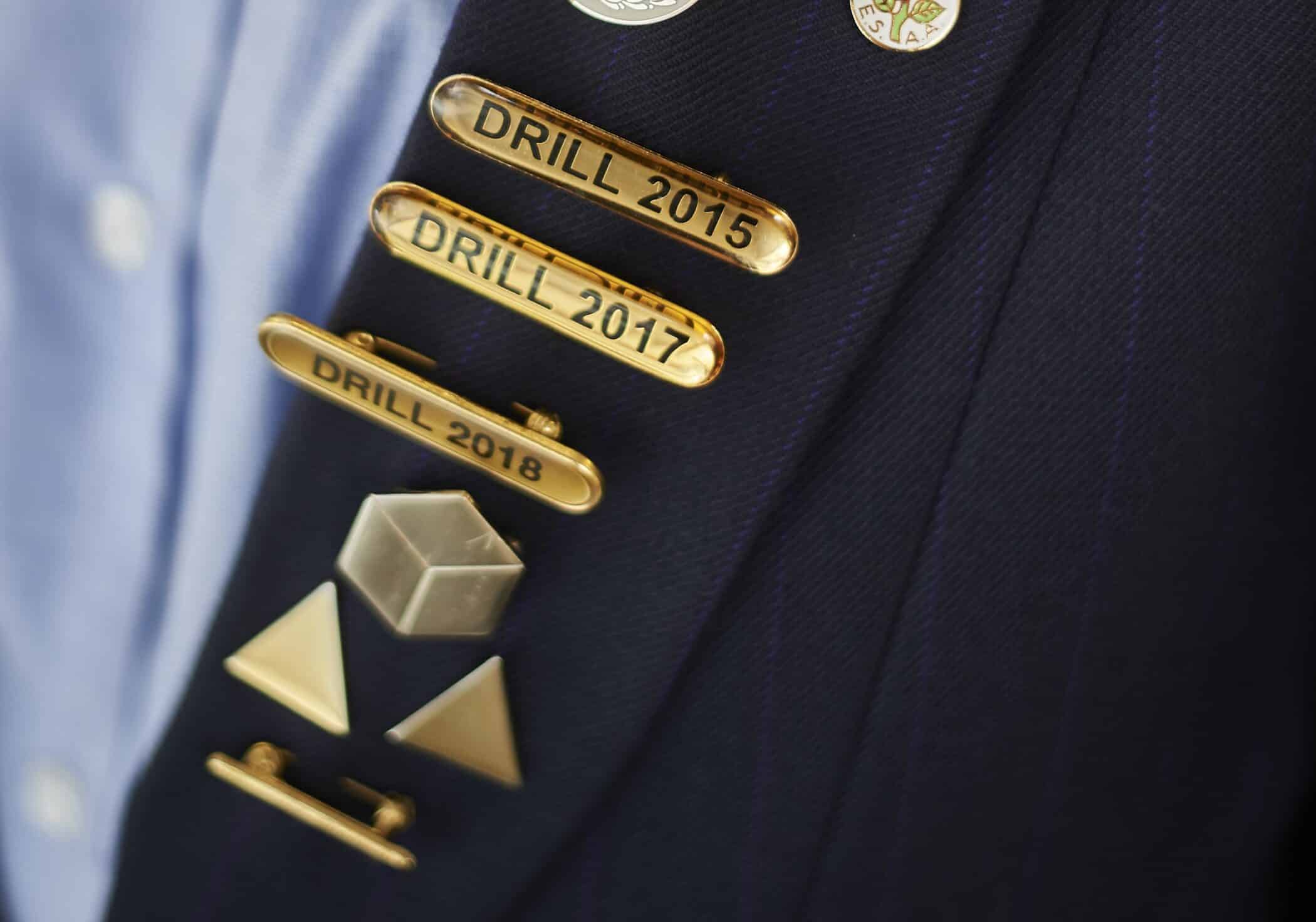 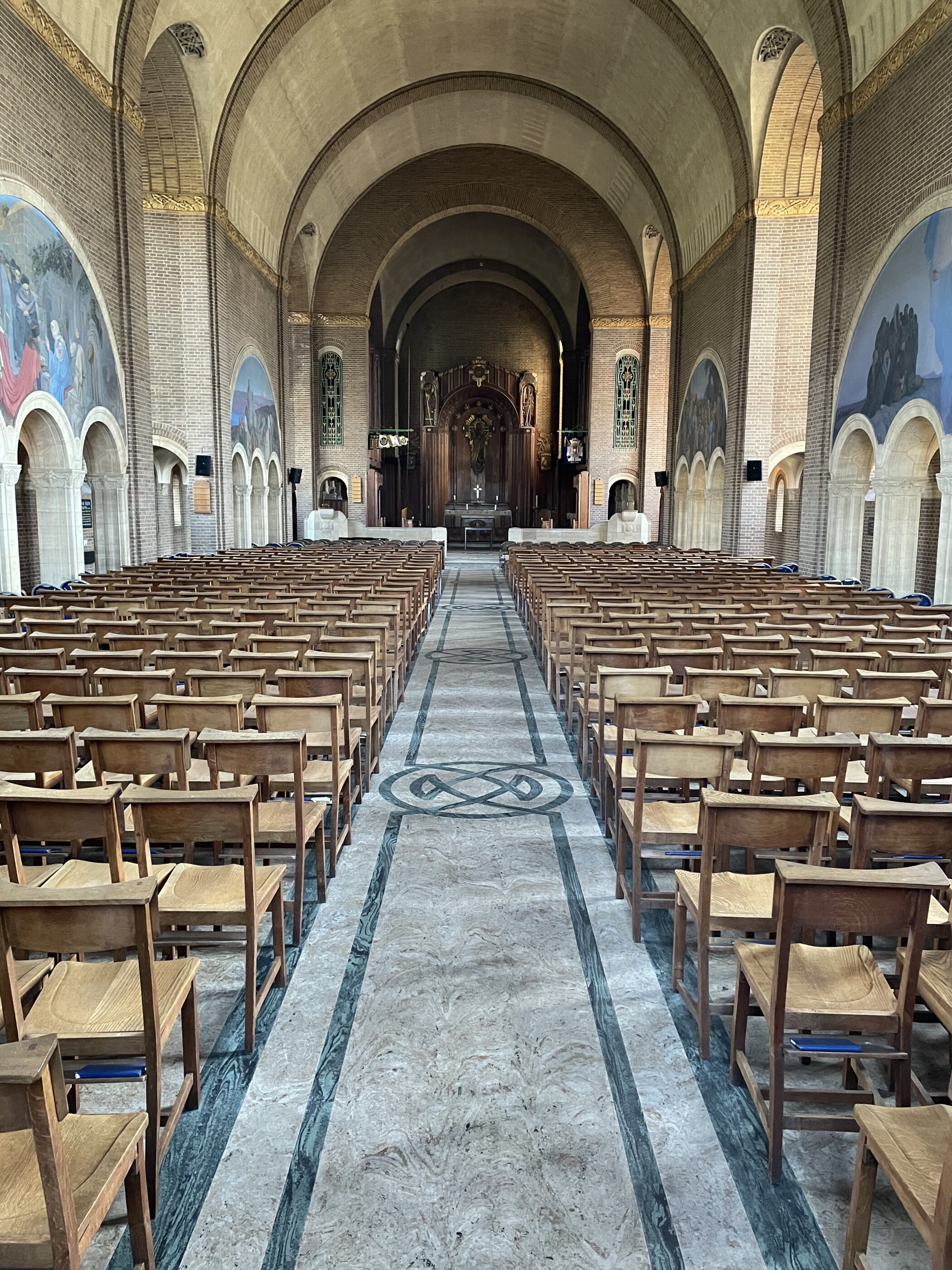