Year 9 Trip to the Battlefields 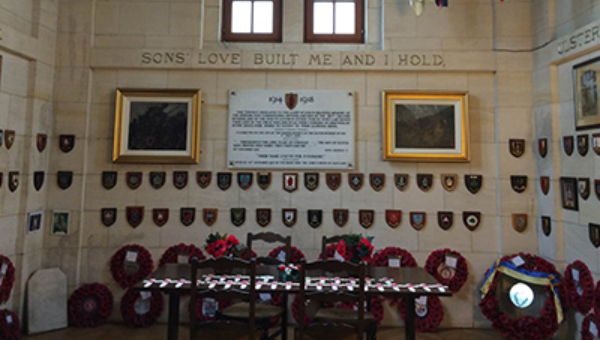 Year 9 had an enjoyable and thought-provoking trip to Belgium and Northern France to see the locations of so many famous battles from the First World War, a subject they have been studying this year.

During the decade before the outbreak of the First World War in 1914 technological innovation and scientific discoveries enhanced industrial production and agricultural output and many European countries prospered. But competition between European states to extend territorial control overseas created international tension. The general sense of insecurity caused the Great Powers to engage in a hugely expensive arms race. This struggle caused severe tension and conflicts and meant that the world stage was set for war.

In year 9 History lessons, we start to learn about the First World War. The Battlefields trip was going to be a unique opportunity for us to see the battlegrounds, trenches and memorials of the Great War and see what we’d been studying in the classroom in real life. Last year marked 100 years since the outbreak of the Great War and you can sense the importance of this when you visit the sites.

Early morning on Saturday the 2nd of May we set off to Belgium. Our first visit was to the newly refurbished ‘In Flanders Field Museum’, in Ypres. The museum is full of interesting artefacts. Its layout is intentionally designed to make the visitor feel uncomfortable and this adds to the atmosphere. It was a good introduction to the trip and provided us with insight into what to expect in the forthcoming days.

On Sunday we got up early and went to the memorial and museum at Vimy Ridge. This site commemorates the attack which was undertaken by the Canadian troops in April 1917.

The Germans had held this important area since the outbreak of war in 1914 so this was a very important battle. The Canadian government now run the site and it is a memorial to their Forces who fought in the Great War. On average 45 Canadian students run this and other Canadian sites and provide detailed tours to visitors. After our tour we went to Vimy Ridge memorial which is a beautiful and gigantic piece of architecture and is carved from a single piece of stone.

Following on from this site we visited the Wellington Tunnels in Arras. This is an underground museum and is founded to the memory of thousands of men of the British Army and Dominion Forces who lived and worked under the city during the First World War. It particularly commemorates the work of the tunnelers of New Zealand, who only used hand picks to create this extensive underground system. Our tour guides showed us a number of features, such as; mining trucks, equipment, food and drink containers and even examples of their toilets!

There are even examples of ‘grafitti’ and drawings left by the soldiers which give you a perspective into how their underground life was.

In the afternoon we visited La Boisselle, which was situated at the heart of what had been the Somme battlefields. With the War on the surface at stalemate both sides had begun probing beneath their opponents trenches in an attempt to gain an advantage. In December 1914 French and British engineers had begun tunnelling beneath this region and placing explosive charges.

This particular crater was made by a gigantic underground mining explosion which had been sprung on the 1st of July 1916, the first day of the Battle of the Somme. The crater has been preserved as a lasting memory to this war and the men who died. A service is held here on the 1st of July every year.

Afterwards we visited the Ulster Tower, a memorial to the men of the 36th (Ulster) Division. At the entrance to the tower is a plaque commemorating the names of 9 men of the Division who won the Victoria Cross during the Somme.

The memorial was unveiled by the Prince of Wales on the 1st of August, 1932. He made a speech partly in French and British and said that ‘our first thoughts should be with the relatives of those whose death has purchased our current freedom’. We found this memorial particularly moving.

We finished our visit to France at the Somme Museum and then set off to Belgium.

We stocked up on Belgium chocolate and then met our guide, Simonne. She was great and knew lots about the sites we were seeing. She started our tour by taking us to Essex Farm cemetery and medical- dressing station.

This is perhaps most famous for its association with John McCrae who, whilst stationed at Essex Farm in May 1915, wrote the very famous poem ‘In Flanders Field’. He wrote this poem after one of his close friends had been killed and buried and he saw the poppies blowing in the wind near the graves and this influenced the words he wrote;

In Flanders’ Fields the poppies blow

Between the crosses, row on row.

That mark our place; and in the sky

Scarce heard amid the guns below.

We then visited Langemark German cemetery. This cemetery outlined a stark contrast to the bright and uplifting memorials we had just seen and many of us considered it to be a different experience altogether. Afterwards we travelled to Tyne Cot cemetery, which is a burial ground for the Commonwealth dead of the First World War; it is also the site where RMS holds their remembrance ceremony each year to the Old Boys’ of RMS. We gathered in a circle and the teachers read out the Act of Remembrance. They then read out the 112 names which are on the memorial along the Chapel corridor.   This was a particularly moving experience as for each name read aloud a student laid down a red carnation and we would like to thank FORMS for providing the red carnations for this ceremony.

Hill 62 was next on our tour. We were encouraged to go into the museum and explore the huge array of artefacts on show. We then went outside to go into the trench system.

It was very muddy and had a distinctive smell and although we couldn’t truly appreciate the soldier’s experience we knew that we wouldn’t have liked to stay in there for too long, especially as some of us went through the dark tunnels and could be heard above ground screaming thinking there were rats in there with us… which was not the case! Having cleaned ourselves up we then headed back to Ypres to have dinner and then see the Last Post at the Menin Gate. At 8pm each day the masses gather at the Menin Gate to hold this ceremony. A young boy from a Scottish school accompanied the trumpeters with bagpipes making this an even more special occasion. It was a touching end to what had been a moving day and also gave us an opportunity to give the Last Post Association the money we had raised through our cake sale- thank you for buying them!

Our final day saw us visiting Talbot House, which today is a living museum. Thousands of British soldiers passed through this house during the 3 years it was open from 1915 to 1918. It was a place where the soldiers could escape from the terrors of the Front line. The soldier’s rank was left at the door and there was always a cup of tea on the go. We were encouraged to play the piano and treat it how the men would have treated it, as a place behind British lines where men could spend time relaxing in a British ‘home-from-home’.

We would like to finish by thanking our teachers, Mr Grogan, Mrs Timoney, Mrs Baron and Miss Hughes for taking us on this memorable trip.