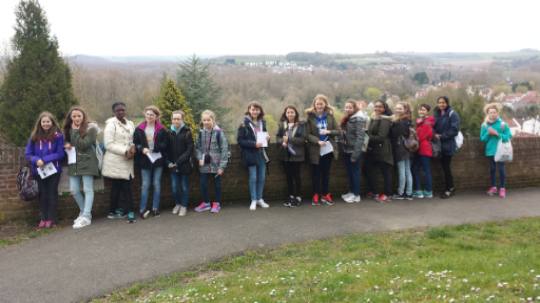 On Tuesday 5th April, 36 Year 7 and 8 girls got up really early to arrive at school for 6:40. We were all excited because it was the day of the French trip!

We prepared for a three hour long coach journey, saying our goodbyes and promising to see our families again in four days’ time. The bus left and the adventure began. More than half the coach spent more than half the journey on their phones or ipods. When we finally arrived at the ferry, we were ready to stretch our legs and proceeded to leave England bound for Calais. Upon our arrival in France, we went to a ‘boulangerie’, or as it is more commonly known in English, a bakery. As we split into two groups, the second group looked a bit nervous, for a man with a big, heavy stick led them to learn about croissant-making. Meanwhile, the first group was taken to see how to make bread by hand. As a thank you for coming, each girl received a pain au chocolat or a croissant to take back to the

hotel. There we learnt who we would be sharing a room with. Some were pleased, others not so much!  Soon we went down for dinner, as we had a dining room exclusively for RMS girls. Dinner that night was chicken curry and chips, followed by a game of lotto (or bingo!). Then we went to our rooms, where we changed into our pyjamas, brushed our teeth, had our phones collected by the teachers and went to bed.

On Wednesday morning we ate traditional French croissants for breakfast and packed our lunches. We then went to the coach and set off for Montreuil-Sur-Mer where we split into two different groups, Mrs. Roberts and Mrs Baron or Miss Lavelle and Mr.Hogg. I was in Miss Lavelle’s group so we toured the town and filled in our booklet. After we had gone round the town we swapped and did our language workshop. I found the language workshop fun, we created role plays in French.

We then settled down and ate our lunch. In our lunch there was a French sweet, it was like toffee but rock hard and it stuck to your teeth! Once everyone had eaten their lunch we played Chinese Whispers, Miss Lavelle would say a short sentence in French and we’d see what it translated to by the end it reached the line. It was really funny to see what people said at the end.

Afterwards we got on our coach and drove to the goat farm! The goats were really cute and one even jumped up on the bars of the pen. We then got to hold the goats and bunnies! After we watched the process of cheese being made, we were shown a week old, a month old and 6 months old matured cheese. Afterwards we travelled back to the Hippotel where we went to our dorms and had fun with our friends. Later we went to have dinner and afterwards made crepes. My crepes were pretty much burnt. After we had all made crepes we had a quiz on French TV and foreign languages, then all went to bed after a busy day.

On Thursday every girl awoke with a smile.  We were going to the chocolate factory! And we were scheduled for a trip around Boulogne, which included shopping.

After a breakfast of cereal, we made our lunch and our beds and climbed aboard the bus. “Alright girls!” Madame Roberts began. “There has been a slight change of plan. The chocolate factory is closed.” There was some discontented murmuring among the students until Madame Roberts laughed and admitted she was joking. When we arrived at the chocolate factory we were met by the owner and taken to a room where there were literally waterfalls of melted chocolate.  It smelled delicious and the small sample we were given tasted even better.

After hearing about the chocolate making process and buying a little chocolate, we proceeded to the aquarium. We split into 4 groups and began to explore. We saw turtles, sharks, seals and even a crocodile or two. We ate our lunch and got back on the bus. Finally, after dinner, Madame Roberts told us why she had bought coloured toilet roll. We had to make a futuristic outfit and a historical outfit for two people in our dorm. It was weird seeing half the trip covered in toilet paper!

On Friday we all packed our bags in the morning. We then went down to breakfast where we ate croissants and packed our lunches for the last time. Then we got on our coach and headed off to Calais. There we filled in a sheet about the town. After eating lunch we were given spare time to have fun with friends. My friends and I looked around the town and bought the last of our gifts for families. Kitty and I shared a giant candy floss and we all tried a Diablo menthe. It was disgusting!

After we had gone round the town we reluctantly got on the coach and headed to the ferry. We then sailed back to England where we got back on our coach and headed back to school. Francesca and I really enjoyed our trip to France and would like to thank all the staff who came with us, and especially Mrs Roberts for organising it!