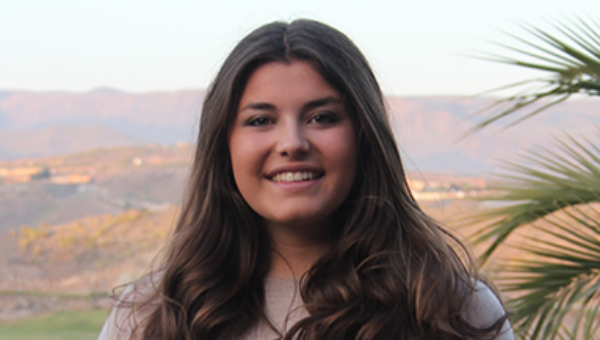 Congratulations to Charlotte, who has fought off intense competition from around the world, to be awarded the Outstanding International Student Award to study Human Geography at the University of British Columbia in Vancouver.

Charlotte, 18, of Loudwater, Herts, is currently studying for A Levels in Geography, Spanish and Textiles at RMS.   Having holidayed in Vancouver a number of times, she fell in love with the city and so decided to apply to study there when she leaves school, confirming her decision after attending a conference in London about studying in Canada.

When asked why Canada, and Vancouver in particular, Charlotte said “The University of British Columbia is one of the best in the world, and whilst I love Geography and want to specialise in it, I still want to carry on studying Spanish, as well as try other subjects like Psychology, which I will be able to do at UBC.    I know that I will be graduating into a really competitive job market, so feel that something like this will help me to stand apart from the crowd too.   The course I will be studying is a four year one, and I will also have the opportunity to spend my third year at Berkeley, California, which is so exciting!”

The University of British Columbia is a global centre for research and teaching, and is consistently ranked within the top 20 public universities in the world. It offers an exceptional learning environment that fosters global citizenship, demonstrated by the fact that it welcomes students from over 149 countries (in fact, 19% of UBC’s students at the Vancouver campus in 2013/14 were from overseas), something else that appealed greatly to Charlotte.

These figures just serve to make Charlotte’s achievement even more impressive –she was also successful in her application for the Outstanding International Student (OIS) Award, a merit-based entrance scholarship awarded to students who impress not just with their academic prowess, but also their personal profile.

Head of Geography and Assistant Head of Sixth Form at RMS, Clare Freeman, said of Charlotte’s achievement:   “Charlotte is an excellent geographer who shows a great interest in the world around her. She will no doubt embrace this opportunity with great enthusiasm and prove an outstanding ambassador for RMS. As a department we are naturally very proud of Charlotte and wish her every success in her future geographical journey”

Charlotte recognises that, alongside that of her family, the support and encouragement from RMS imbued her with the confidence to apply for the scholarship.   “It sounds like a cliché, but at RMS, every girl really is encouraged to become the best they possibly can be, no matter where their strengths lie. During my time here, I have had the opportunity to try so many things, including being part of the school “Drill” team, acting as a Subject Ambassador, travelling to Ghana to see how the charity money we raise here benefits a school there. Through these opportunities, I feel better prepared for and excited about tackling the next stage of my education”

Mixed with the excitement and pride in her achievement, Charlotte does admit to being slightly nervous about being so far away from family and friends, and divided by a time difference which will make even Skype a little problematic, but the promise of winter weekends spent skiing and summer weekends at the beach are going some way towards allaying her nerves!

We wish Charlotte lots of luck, and look forward to hearing about her time in Vancouver.