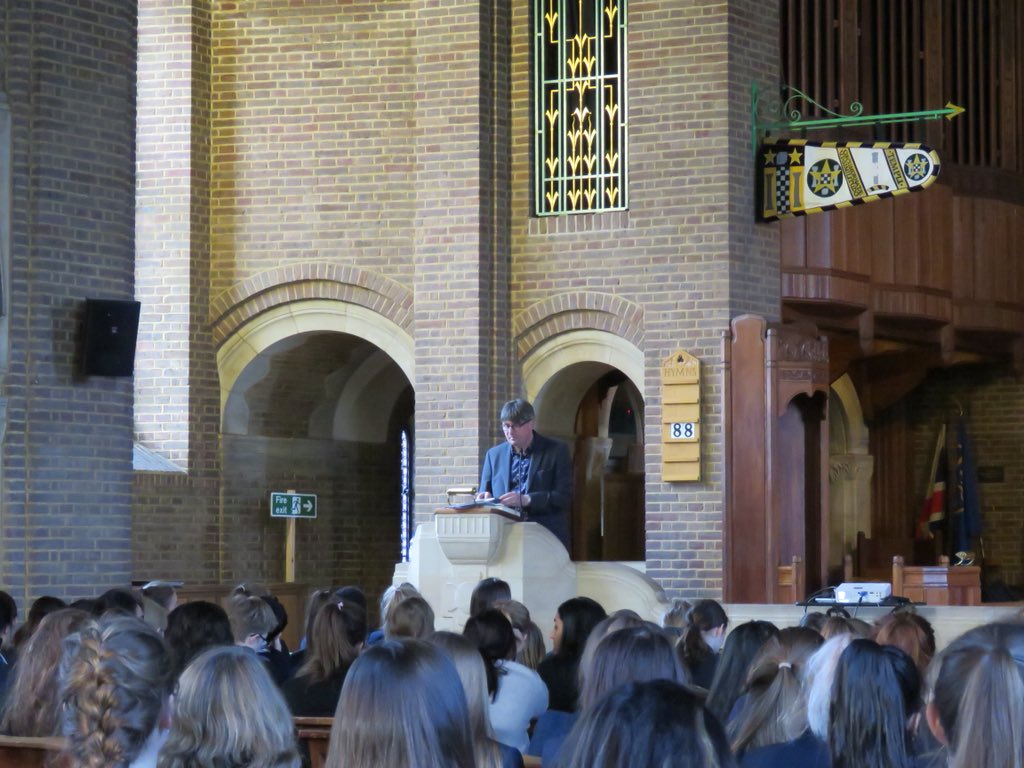 Wednesday, 21st March 2018 was World Poetry Day and at RMS, we were thrilled to welcome Simon Armitage CBE to the school for a particularly special event.

For many, many years, Simon Armitage’s poetry has featured on national GCSE specifications, making Simon Armitage one of the nation’s most famous living poets as well as one of the most popular. Every year, Simon Armitage attends GCSE Poetry Live! events around the country, during which students listen to a range of poets read and discuss their poems. We have taken hundreds of students to Poetry Live! events in order to enable them to have the experience of listening to poets perform their works and answer questions about their poetry.

We were thrilled  this year to be to organise this for Mr Armitage to visit the School – AND on World Poetry Day itself! All of our current GCSE students are studying Armitage as one of their set poets, as will all our younger students. This year, Mrs Gardner selected Armitage’s most recent collection, The Unaccompanied (2016) as her set poetry text for one of the pieces of coursework that the A Level Literature students will complete. The Unaccompanied is a beautifully moving collection of poems about people, but also about how lonely people can be in such a busy world.

Who is Simon Armitage?

As well as being a prolific poet, Armitage also writes for radio, television and film. He has produced four stage plays. His play The Odyssey: Missing, Presumed Dead is a fantastic reproduction of the classic tale of Odysseus, set in a corporate world. Armitage has also written several novels and non-fiction books. Armitage also wrote the lyrics for Feltham Sings – a project in which young offenders voiced their struggles through song. Feltham Sings won a BAFTA award in 2002. Simon Armitage has also produced several translations of medieval texts, including Sir Gawain and the Green Knight (selected as a Book of the Year by The New York Times and the Los Angeles Times), Pearl and The Death of King Arthur, which was a Poetry Book Society Choice and also shortlisted for the T.S. Eliot Prize.

Simon Armitage has been the recipient of dozens of awards and honours for his work. In 1999 he was named the Millennium Poet; in 2012 he was presented with the Hay Medal for Poetry. He has also received a Lannan Award and the Keats-Shelley Poetry Prize. In 2010 he received the Commander of the British Empire and in 2015 was named the Oxford Professor of Poetry. He is currently also a Professor of Poetry at Leeds University.

Much of Simon Armitage’s work is concerned with people and their struggles. In 2006, Armitage produced a commemorative poem for the September 11th 2001 attacks called Out of the Blue. Rufus Sewell reads the twenty-minute poem on a film produced for the occasion, which is available on youtube for those who wish to watch it. It is a powerful, moving and heart-wrenching piece about what took place on that terrible day. An extract from the lengthy poem was previously included upon the AQA GCSE-specification prior to the most recent reforms.

Armitage has also worked on the Channel 4 project ‘The Not-Dead’ about the suffering of soldiers who have survived war, but have been left both physically and emotionally scarred. Soldiers who have survived combat are often thought of as fortunate; Armitage’s poetry and the Channel 4 documentaries aimed to shed light on the suffering and trauma that these soldiers had endured. ‘Remains’, studied by our GCSE students and ‘The Manhunt’, studied by former GCSE students, both come from this collection.

In 2011 Armitage wrote the radio play Black Roses: The Killing of Sophie Lancaster, following the murder of twenty-year-old Sophie Lancaster. In 2007 a group attacked Sophie and her boyfriend Robert in a park for no other reason than because Sophie and Robert were goths and their appearance and fashion stood out for this reason. Robert survived his injuries, but sadly Sophie died days after the attack. The play Black Roses is spoken from Sophie’s point of view and takes the reader through the journey of her life and the horror of losing her at the end. Black Roses was short-listed for the Ted Hughes award. It has since been produced as a stage play and a BBC film.

While visiting RMS, Simon Armitage, who is currently a Professor of Poetry at Leeds University, taught a creative writing workshop to a select group of English Literature students from Years 11-13. During the engaging and humorous session, Armitage asked us to complete a range of activities to help us think about how to use language effectively and meaningfully, how to structure and organise our creative pieces and how to create visual ideas and images. He gave us lots of tips on how to overcome difficulties or hindrances when producing creative writing. Each of us in the session produced an outline of a very personal piece that we were then able to take away and edit further.

In our beautiful Chapel, Armitage then delivered a poetry reading to hundreds of students, staff, parents and former staff, who returned to the school for the occasion. As always, listening to poetry being read aloud is a very different experience to sitting with a book and this was a fabulous chance to listen to Armitage perform his own work. Armitage included ‘Mother, any distance’ and ‘Remains’ as these are the two poems currently on the GCSE specification, making sure to give some personal background information to each of these poems. Armitage also included numerous poems from The Unaccompanied for the group that are currently looking at this selection – and we were particularly pleased to hear him read ‘To Do List’ as we had chosen to study it earlier that day. It seems that there is no subject that Armitage cannot write about – as he proves with the poem ‘I kicked a mushroom’ (which is, as it sounds, about kicking a mushroom in his garden). After the reading, several students later particularly commented upon ‘Oh come all ye faithful’, a poem which celebrates the diversity of people (and can be found in Black Roses), as one that they particularly enjoyed.

During the Q&A sessions, many students asked Armitage questions of their own. They ranged from questions about his own school life and experiences, to questions about how he began his work as a writer and which other writers particularly influenced him (Ted Hughes). We also even had a request for a final poem, the wonderfully comical satire, ‘Thank you for Waiting’, which one of our Year 12 A-Level Literature groups had particularly enjoyed. (There is a video of Armitage reading this poem on youtube for those who are interested in hearing it.)

After the poetry reading, we gathered in the New Mark Hall where, thanks to Sheryl at Chorleywood Bookshop, students had the opportunity to purchase a range of Armitage’s works. The queue of students who wished to have their new purchases signed stretched across the hall and Armitage was more than willing to spend time chatting to students, parents and teachers and having photographs taken.

And it wasn't just our current students who reacted to the news of Mr Armitage's visit to RMS: former student Hannah Roberts (via Twitter), said "I can’t explain how jealous I am, he genuinely reignited my passion for literature and is a contributing factor to why I chose to study it at University.”

World Poetry Day 2018 will certainly be one for all of us at RMS to remember. We would like to thank everyone involved in helping us arrange this wonderful event, including Caroline at the Hawkridge Agency, Sheryl at Chorleywood Bookshop and, of course, Simon Armitage himself. We were delighted to welcome him to RMS and are already wondering when we can invite him back for another visit.