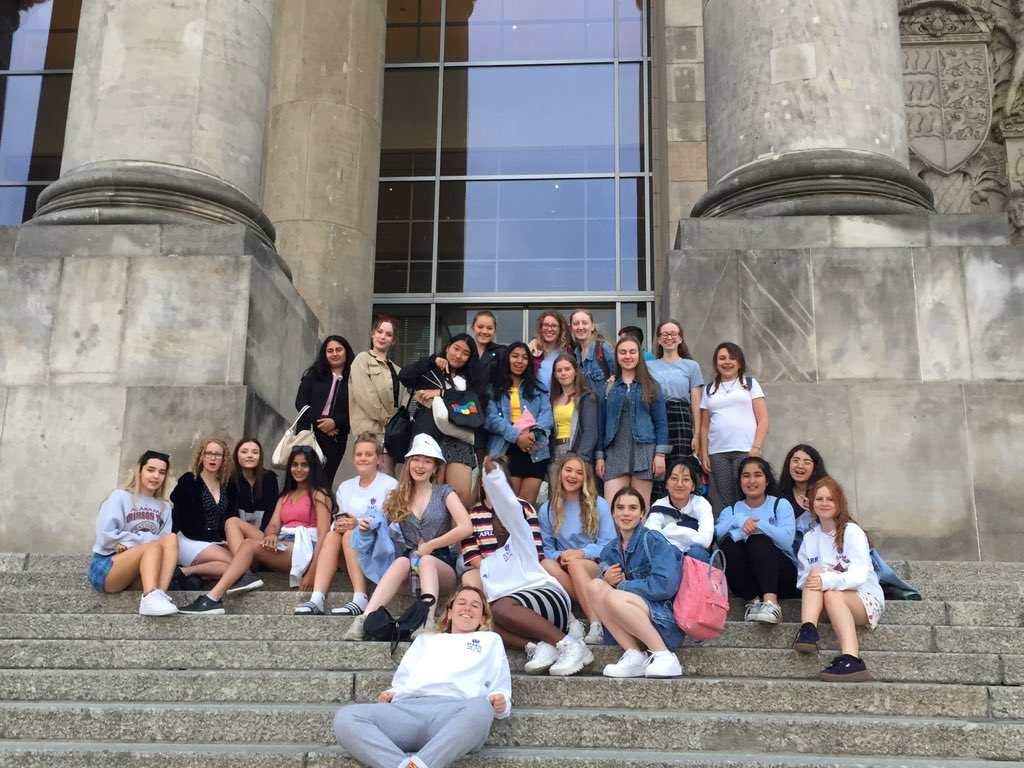 On Friday 5th July, 26 Year 10 History students, along with Miss Simmonite, Miss Callow and Mrs Roberts made their way to Berlin.

After several delays, we finally reached our hotel and had a good night’s sleep in preparation for the following day.  We were expertly led through the city by our tour guide, Chloe, on a three-hour historic narrative of the sites where the rise of Nazism and the Battle of Berlin were played out in 1933-45. The tour took a more sombre direction as we made our way to the Jewish, Soviet and Roma/Sinti memorials, before heading to the Brandenburg gate and the site where the Nazis burned all books written by Jewish and socialist authors in an attempt to rid the German Reich of all literature that would undermine the Nazi regime. We were surprised to see lots of light patches in the façade of otherwise dark buildings, and we learned that this was plaster used to fill the bullet holes left in them from the Battle of Berlin. This struck me as we always learned about wounded soldiers returning from the battlefield, but we never stop to think about the architecture that suffered war wounds too.

We went to the cinema in the evening, for some light-hearted entertainment.  As none of us could speak German, we spent the day fretting about this, because we were lead by the teachers to believe that we were going to watch an adaptation of the Left Handed Woman in German.  However, to our great relief and delight, we watched Aladdin – in English! We ended up singing Aladdin songs throughout the rest of the trip.

On Sunday, we had a very sobering trip to Sachsenhausen Concentration Camp in Oranienburg. The cold weather only added to the bleakness of the place. In the evening, we visited the Reichstag and enjoyed taking photographs with the picturesque view of the setting sun in the background.

On our last day, we had another walking tour around the city, but this time we focused on the cold war instead of the World War. We visited the Berlin Wall memorial, where part of the original partition still remains.  We saw there the commemoration of those who died trying to escape East Berlin, with flowers and candles left by the plaques of some of the names.  The wall clearly still causes grief today.  This was recent history: it only came down 30 years ago this year. We finished our trip by visiting the 1936 Olympic stadium. The stadium was huge and can hold up to 75 thousand people!  And during the Nazi period, it hosted the Third Reich with much pomp and ceremony.

Thank you to the staff who took us on this fascinating and enjoyable trip.