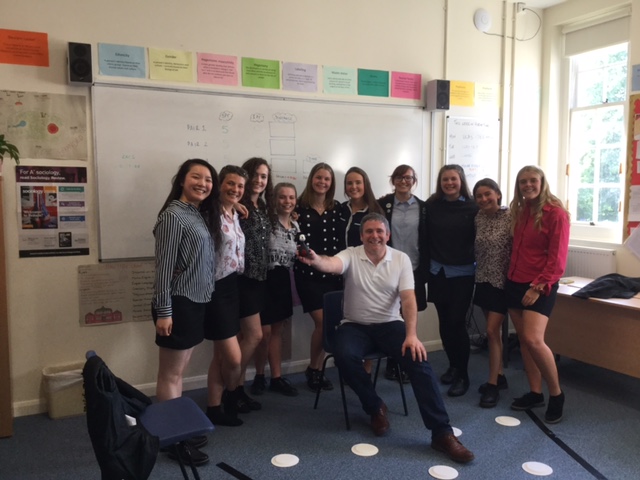 The Annual Sixth Form Leadership Day started bright and early at 8:15 where we met and introduced ourselves to the boys from John Hampden Grammar School.

We spoke about the most important qualities of a leader and how we can improve our own leadership styles. We then went  to the Sports Hall, where we then split off into pairs for a Scavenger Hunt, searching for clues that were hidden all around the school. This was a great way to get to know the boys better.  After a quick change and run back up to Hind House we had a problem-solving challenge where we had to rescue snake-bitten Ms Bailey and get the antivenom to her in time. Much to our surprise we completed the challenge in under 10 minutes which is the fastest Mr. Kemsley had ever seen it done – even after his years of experience in the military. It was a difficult challenge and showed us the importance of delegation when under timed conditions.

Following our success in the challenge we did some debating where we were taught ways of getting our point across and making ourselves heard. We then went down to the sports hall for a team challenge where we had to direct each other across an obstacle course while they were blindfolded. This really tested the trust we have in each other and our patience. We also had to come up with a way to cross the shark-infested custard using mats and hoops. These challenges were difficult but also a great way to work together as a team in preparation for the year ahead.

We arrived back up at Hind House and started to brainstorm ideas for our Head Girl Team Aim for the year. After lots of discussion we made our final decision, which will be announced in September. Then at 5.00pm it was the moment we had all been waiting for… the competition. Each team took a room and simultaneously battled it out to see who could complete the challenge in the shortest time. Both teams required a lot of trust in each other as we were being guided blindfolded by our team mates once again. Finally, we had finished, and it was time for the other highlight, dinner. We enjoyed a 3-course meal and had a great time chatting about the day. Dinner over, it was time for the results. Due to some sort of miracle, the boys managed to beat us by 7 seconds, claiming the trophy once again, making the score 8-3 to RMS.

Aside from the painful loss, we all had the best day getting to know each other as well as being challenged in our leadership. Thanks to Mrs Freeman and Mrs Roberts for organizing such an amazing day.