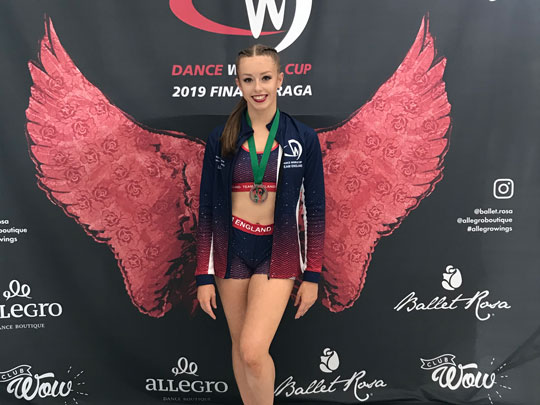 Congratulations to Lily in Year 11, who took part in the Dance World Cup in Portugal over the summer and brought home a silver medal for Team England!

The medal was for the Junior Small Group Commercial dance, which Lily performed with her fellow dancers from Hannah-Marie Dance Academy, and there was only 0.5% difference between the silver and gold position.

Lily also came 11th in the world for her solo performance, which was particularly impressive as she was suffering from an injury to her ankle. Overall, England were the winning country at the Dance World Cup in Portugal.

The Dance World Cup was a wonderful event, including the opening ceremony which had a great atmosphere with dancers from all over the world. It was a great experience for Lily and she will be applying to qualify for the 2020 Dance World Cup in Rome so fingers are crossed!

Congratulations to Lily in Year 11, who took part in the @danceworldcup in Portugal over the summer and brought home a silver medal for Team England and @hmdanceacademy #dancing https://t.co/gkCPp4cv3b pic.twitter.com/4AoC75pxBj