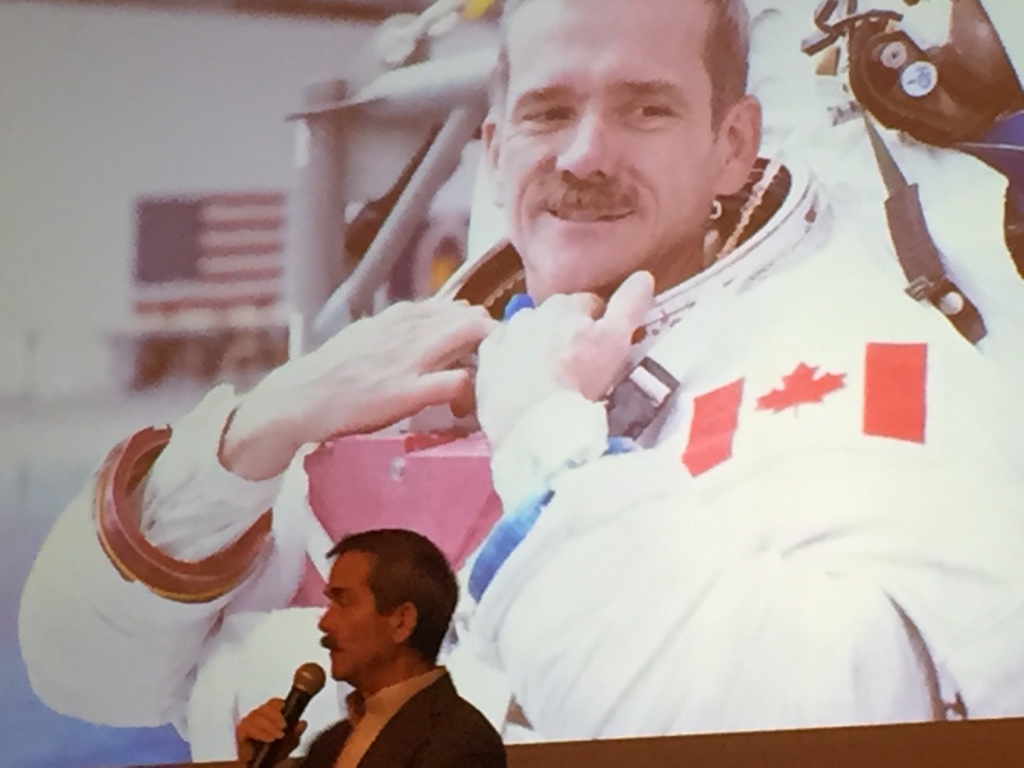 Over 500 people braved the winds and rain to come and listen to celebrated astronaut Chris Hadfield talk about his experiences on the International Space Station.

Discussing his book, "You are Here: Around the World in 92 minutes", Commander Hadfield entertained us with stories of his boyhood dream to be an astronaut, his training, his time on board the International Space Station, as well as having time to give advice to students about their future plans.  He even managed to fit in a much anticipated and much appreciated rendition of David Bowie's "Space Oddity", the original recording of which has attracted over 27 million views on Youtube.

During the course of the evening, we learnt that a space suit weight around twice as much as the average adult male (and is very difficult to wriggle into!), that Commander Hadfield took over 45,000 photos during his time on the ISS, that he experienced either a sunrise or a sunset every 46 minutes, and that he is a qualified Emergency Medical Technician (and even volunteered to take out an audience member's appendix – an offer that was NOT taken up!)

But the main thing that many audience members will have taken away from the evening is the thought that Commander Hadfield started the evening with – impossible things CAN happen, using the example that 110 years ago, exploration of Antarctica was almost impossible and almost certainly doomed to failure, yet today is almost commonplace. He championed the process of "invent, test, apply" when asked about the likelihood of a Mars mission, believing it will happen, once the technology and the will to go is sufficiently robust.

When asked what advice he would give to British astronaut Tim Peake who will shortly be heading the the ISS, he said he should work hard, love the experience and not forget the sheer magnificence of what he is doing.  He also advised him to share the experience as widely as possible, and in so doing, inspire young people to do something they might otherwise not have thought they could, in the way that Buzz Aldrin and Neil Armstrong had inspired Commander Hadfield.  He also cheekily suggested that Tim Peake should practise the guitar a bit…

One audience member asked Commander Hadfield if there was a photograph of earth that he had not been able to take but that he wishes he had – the answer was Uluru (Ayers Rock) – he tried to take it a number of times but failed each time as the rock blends into the surrounding earth and is there hard to spot!

When asked what advice he would give RMS girls, he told them to choose their own definition of perfection, to appreciate that life is the sum total of the choices you make as to what you do next, and not to make the goal the only criterion for success – life is a sequence of smaller achievements and these should all be celebrated.

It was a fascinating evening, which culminated in his now famous version of Space Oddity, to rapturous applause.

We would like to thank Commander Hadfield for staying on so long to ensure that he signed everyone's copy of his book, and to have photographs taken.

Here are some of the photos from the evening