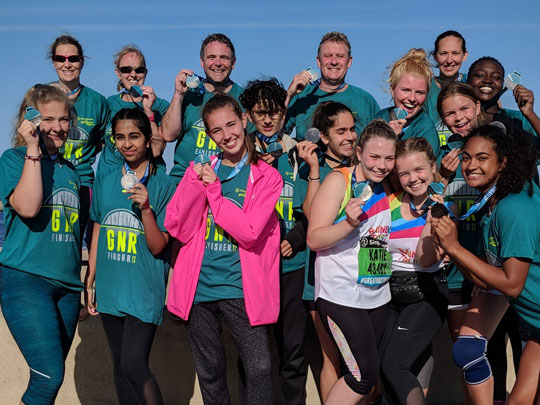 Congratulations to our team of Sixth Form students and staff who raised over £6,000 for the Rainbow Trust by successfully completing the Great North Run half-marathon!

A year ago we launched the RMS Edge programme in the Sixth Form, which encourages breadth and depth for the students. As part of this we embedded wellbeing into the curriculum, with students able to take part in yoga, zumba, self-defence and a variety of other sports.

Head of Sixth Form, Mrs Freeman, decided it would be a great idea to have a sporting challenge to encourage students to go running, aiming towards a half-marathon: the Great North Run.

Perfect winter weather for a training run to the #Rickmansworth Aquadrome and back for our #GreatNorthRun team. 9 running today from our 14-strong team of staff and students. @RMSSixthForm @kevin_carson @Great_Run ‍♀️ ☀️ pic.twitter.com/j1lFK7LlJX

Most of those who signed up had never run regularly before, and started with short distances of just a couple of kilometres around the school site, but over the course of the year the students – and staff – started building up their distances and fitness.

The dedication, enthusiasm and team spirit were all evident, and by Sunday 8th September all participants – twelve students, five members of staff and one parent – were feeling excited and ready to go, mixed with a tinge of nerves and apprehension.

Arriving at the start line was a goose-bump moment; surrounded by 50,000 other runners, including the likes of Mo Farah, the atmosphere was buzzing. The race itself runs from Newcastle city centre to South Shields on the North Sea coast.

Locals lined the streets as we ran through, handing out sweets and lollies and spraying us with water cannons. The last kilometre along the sea front saw thousands of spectators standing ten people deep, watching and cheering us on! Every single member of the team made it around the 21km route to cross the finish line.

Amazing efforts and so proud of the whole #GreatNorthRun team… pic.twitter.com/7rJCStJFvE

These students really are inspirational young women; over the last year they have demonstrated every single one of the school values and can be hugely proud of themselves. Following the race, Ibby commented that she was now 'retiring from running', whilst Caitlyn and Tallulah have already been searching for their next event.

Not only have all these students completed this life-changing event, they have also helped to change the lives of others by raising over £7,000 for the Prefects' Charity, the Rainbow Trust, across the Justgiving page and also cash donations.

The school is hugely proud of each and every one of our runners. Congratulations to Ibby, Cailin, Tallulah, Yasmin, Hadiya, Faith, Heleen, Katie, Heather, Emily, Neneh, Mr Carson, Mrs Freeman, Mrs Roberts, Mrs Sears and Mr Cox – and Charlotte who trained, but sadly was injured a few days before.

⚡️ Check out our Twitter Moment following the @RMSSixthForm team's journey from their first training run through to completing the @Great_Run #GreatNorthRun and raising almost £6,000 to add to the £10,000 already raised for @RainbowTrustCC ‍♀️https://t.co/u92zOcp7T7