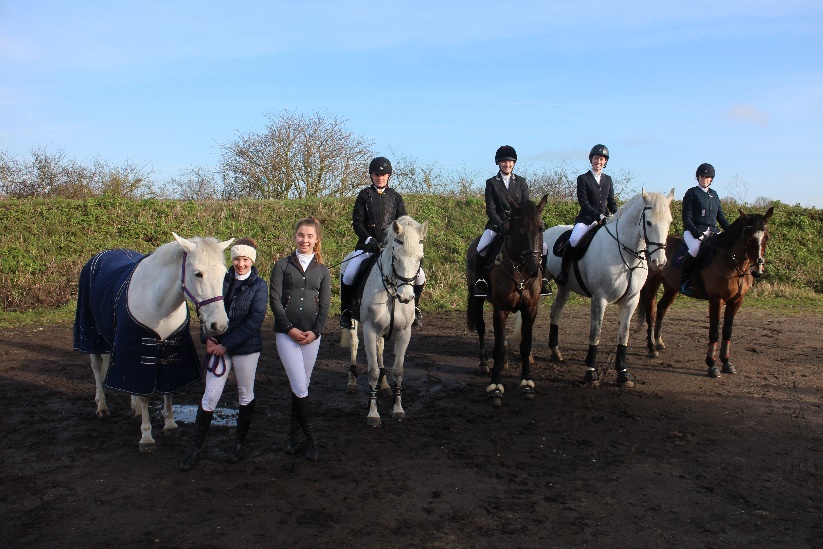 On Saturday the 23rd of January the RMS equestrian team set off to their first show together. The competition overall was massive with over 400 riders competing. Bury farm, in Slapton, is a large show centre where the National Schools Equestrian Association (NSEA) held this event. There were three teams that competed throughout the day over various heights. There were two team in the 70 cm, the first team was made up of Phoebe E  (Year 7)with Bambi’s Magic Crystal, Imogen H (Year 7) with Sony and Millicent M (Year  with Ronswood Fancy That. The second team consisted of Abigail W (Year ) and Rosie, Emily C (Year ) and Sugar, and Liberty B-A with Bobby. Both teams competed very well but unfortunately missed out on the placings.

There were also two teams from RMS in the 80 cm class, again both teams did very well but unfortunately some unlucky poles down meant that the teams just left being placed. The first team was made up of Sophie P with Shutter PZ, Laura B with Educated Guess, Abigail W with Rosie and Liberty B-A with Bobby. The second team was made up of Phoebe E with Bambi’s Magic Crystal, Imogen H with Sony, Millicent M with Ronswood Fancy That and Emily C with Sugar. Kate F with Gina’s Art Noveux competed in the individual 80 cm and did a very fast clear round leaving them in 5th place after they had jumped.

Finally, the last class RMS entered was the 90 cm where Kate F and Sophie P entered as individuals. Kate F with Gina’s Art Noveux did very well going clear around a very big track and was one of very few competitors to go clear. Unfortunately, Sophie P had to withdraw from the 90 cm as Shutter PZ injured himself before competing.

Overall, it was a enjoyable day out competing and representing RMS in the new equestrian team, set up by Miss Brooks, Katie C (team manager) and Sophie P (team captain) with the help of Susanne W for making saddle cloths with the RMS logo on it. As a team we look forward to the next event together.