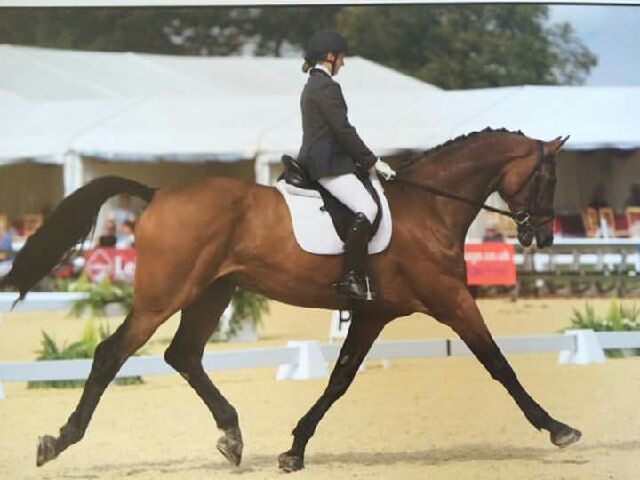 Here be Dragons is my Dads horse who I started riding the beginning of this year.  Dragon and I registered as a combination with British Dressage at the beginning of June this year with the aim of qualifying for the Summer Regional Finals by the end of June which was quite a challenge due to the timescales.  We managed the qualification in three tests. We then went to the Regionals at Sparsholt in Hampshire in July where we scored 71.38 and came third.  We were then lucky to be one of the highest scorers across all the seven regional finals and were granted a wild card to the National Champs on September 18th at Stoneleigh Park near Coventry in Warwickshire.  Twenty three from around 400 combinations at the different Regionals were invited to the Nationals.

As term had started practice & preparation was limited to after school.  We had an early start as we travelled up on the day, so the first time we rode on the arena was the test itself.  There is an arena warm up but as this was at 7.30 in the morning we had to miss it.  These championships are the biggest competition I’ve ever done, and I was nervous on what to expect & knew that the standard would be high.  The top dressage riders such as Charlotte Dujardin and their horses/ponies were there over the 4 days in varying classes which was exciting.

Dragon & I got ready and were in the warm up arena in good time where we worked together on shape, suppleness and impulsion.  We practiced some of the compulsory elements required in the test.  All too soon it was our turn to enter the show arena and as we went through the arch our names came up on the big digital screen.  There were three judges each at different points of the arena, so we saluted to each of them and then started.  Approximately five minutes later we were finished.  I was very happy with our test and delighted when our score came though at 65.75.  We finished up 16th, having had a wonderful day and an experience never to be forgotten