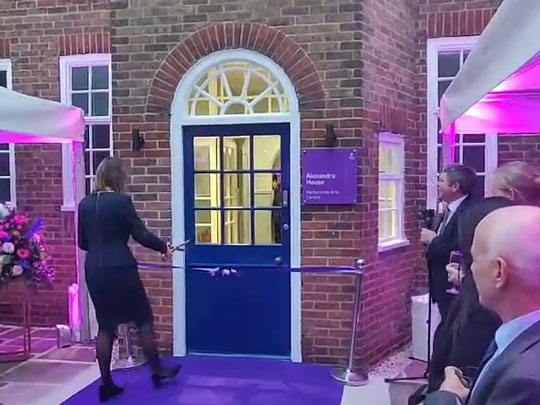 On Thursday evening we were delighted to welcome our benefactors, alumnae, staff and parents of the girls studying Performing Arts in Year 10 and above to the opening of the Performing Arts Centre.

Our special guest who officially opened the building was Anne Dudley. Anne is a multi-award winning musician, composer and performer.

She is also a past parent and has a very special connection to the school because in 2009 she composed the school hymn. We were delighted that she was able to speak about the importance of the performing arts and the role it plays in education.

After the ribbon had been cut, guests were taken on tours of the building by pupils. Live rehearsals were taking place in the drama studio, dance studio, recording studio and the music classroom.

In the Recital Hall, the stage was set for our four soloists. We are hugely grateful to Anna, Maya, Millie and Antonia for their stunning performances on piano, violin and voice.

The evening was a wonderful showcase of the incredible range of talent our girls possess. Thank you to all the staff and students who made it such a successful evening.

A sneak preview of Antonia and Mr Werner warming up for the official opening of The Performing Arts Centre @RMSforGirls this evening. pic.twitter.com/Ke47TdDV31

Our very own @RMSSixthForm student wowing the audience at the opening of the #performingarts centre pic.twitter.com/eIgnPLgeWu

A couple of @RMSSixthForm in the sound booth recording in our new #performingarts centre pic.twitter.com/PC4w85egTX