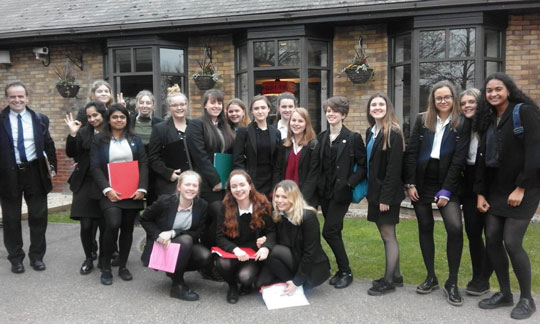 A group of RMS sixth formers, excited for a weekend of debate and discussion, set off for Haileybury College on Thursday 22nd March.

Our first evening consisted of an engaging opening ceremony where we had the pleasure of listening to the former British Ambassador to North Korea.

This was followed by a flurry of informal lobbying, then dinner and later, formal lobbying, where delegates could get to know each other, exchange views from their delegations and work towards getting ten signatures for our own resolutions, in the hopes that these would be debated the following day.

Throughout Saturday and Sunday, we experienced fruitful debate and had successes in terms of passing our own resolutions and amendments in our committees. Annabel’s resolution on the question of the Falkland Islands was debated and passed in her committee.

Tallulah also presented her resolution on the human rights surrounding neurotechnology which was debated in her committee.

These were just a few of the achievements our delegates experienced over the weekend as there were equally as many focused points of information, interesting policy statements and exciting speeches which our delegates contributed to their respective committees.

RMS ready for Shack Night after a day of debating! #HMUN19 pic.twitter.com/ubLlcu1Fqi

The detailed debate kept our minds engaged throughout the entirety of the weekend, but we also made new friends from across the UK and met delegates from California, the Netherlands and Spain.

On Saturday night, we were able to enjoy a delegates' disco with our new friends, but equally bonded as a team and were able to support each other in our committees throughout the weekend.

Ultimately, we were able to see why Haileybury MUN is such a special experience and are excited to attend the conference again next year.

RMS ready for Shack Night after a day of debating! #HMUN19 pic.twitter.com/ubLlcu1Fqi