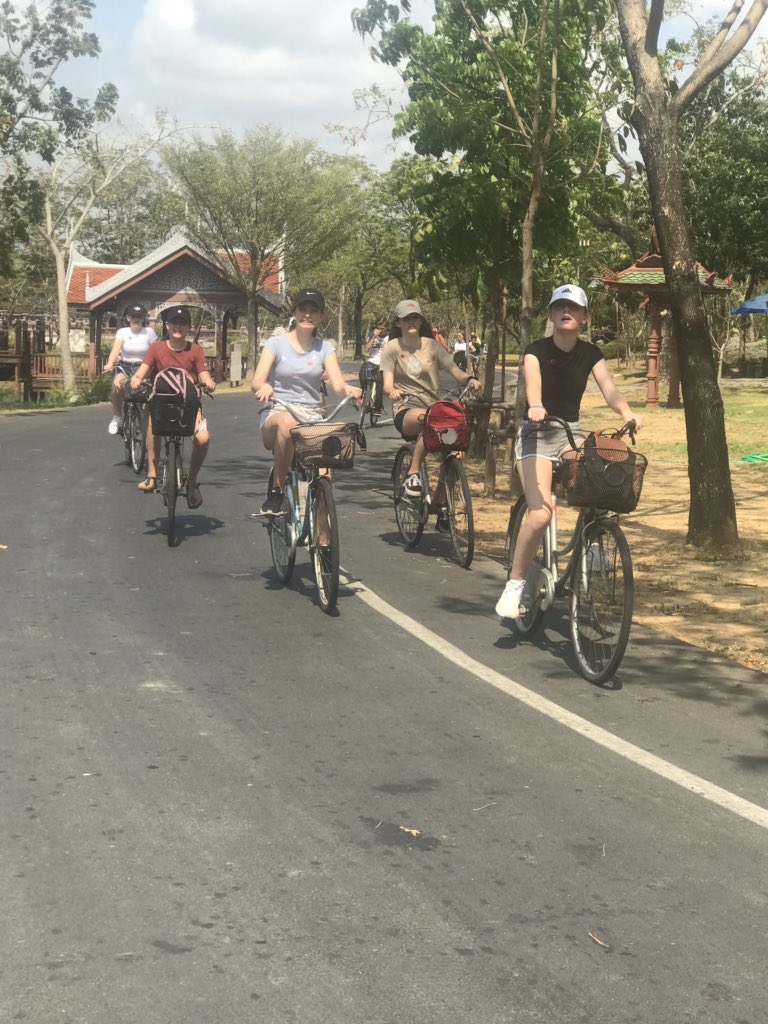 This term, a group of Year 9 students travelled to Thailand as part of the exchange programme with Harrow International School Bangkok.

Our girls, accompanied by boys from John Lyon School, swapped the cold for an unforgettable two weeks of sunshine and new experiences. Below are some excerpts from the girls' diaries…

Today we are heading off to Bangkok! I can’t believe it’s finally here – we are off for two weeks by ourselves to experience the cultural differences and amazing views here in Thailand! We even get to experience what it’s like going to school, in such a hot country.

We finally landed in Bangkok after a long flight. When we got off the plane it was extremely hot compared with home. The airport was very busy but we got through safely and on the other end there was a bus waiting for us with the air conditioning on full blast. The bus took us to a port where we got on a boat and set off on our journey to the island of Koh Samet.

The boat journey was exhilarating – it really felt as if we were flying through the water. When we arrived at the sunny beach on the island, we waded through the crystal clear water and headed to the hotel for a well-deserved rest…

First full day in La Lune resort, Koh Samet. We were told that we were going snorkelling which we were all very excited about! We got on a speed boat and sailed to some islands with a variety of different fish to look at.

At the end of the day we discovered that we had not adjusted to the heat as well as we thought we would, as we all came back a bit red. We had dinner at the resort and were all ready for an early night.

4th March – Back to Bangkok

Today was the day we were transferring back to Bangkok – it was a long journey so when we arrived we unpacked and went straight for dinner. After that we got our school clothes and bags sorted ready for our first day at Harrow International School.

We were all a little bit nervous, but mostly excited. We had our first Thai cultural lesson which was fascinating, and then we hit the water with some kayaking on the lake at Harrow. I think we were all a bit tired but that didn't stop us heading out for dinner at the Baiyoke Tower and enjoying the amazing views over the Bangkok skyline. The buffet was just fantastic – there were so many new flavours to explore!

6th March – Back to School, and Thai Market

Lessons again were different, especially since the children there are so advanced, and we were occasionally a bit lost in what they were learning about as we hadn’t yet covered some of the work – but we are all pretty smart (!) and the teachers were there to guide us. We had dinner at the boarding house, which was pretty great, including a spicy papaya salad! We also had the chance to visit a Thai market – there were so many different sights and smells to enjoy, which really showed us how far from home we were!

Back to school again – everyone is so friendly and the teachers are all so lovely. Today was House Day, so we had to wear our house shirts to school – everyone is really making us feel so welcome and part of the school!

After lessons finished, we headed out to the Future Park mall, where we did some shopping – obviously, we ARE RMS girls after all! Then we went ice skating – which felt a bit odd in such a hot country!

It may only have been a few days, but it feels like we have been here a lot longer as we have made such good friends with everyone. It is tough having to get up so much earlier than we do at home, but we are having so much fun we aren't complaining too much about the early starts!

Today we had a big barbecue at the boarding house after school and squeezed in a game of football too!

Today we thought we were going to get a lie-in and a break from everything, but no! Up at 6.30 and leaving at 8.00, we headed out to the Ancient City where we found our transportation for the day – old tatty bikes with no gears and basically no brakes! After a few minor accidents trying them out, we got on our way – it was so hot and we were all dripping with sweat.

By the end all we wanted to do was get into the pool back at the hotel! While we were there we had lunch – delicious chicken fried rice – and enjoyed all the sights. Back in the city, we had an evening river cruise, complete with fabulous food and mocktails!

We headed off to the Rose Garden Thai Village to experience some unique culture. We learnt how they made decorations with flowers, crafted an elephant sculpture out of a lump of clay, and then painted a traditional Thai pattern. We then made fish out of coconut leaves and tried our hand at vegetable carving.

After a busy day we had an equally action-packed evening including bowling and finishing off with some delicious ice creams.

The day started with school as normal, after which we went to a market where everyone got bubble tea which was lovely and refreshing. Seeing the Thai market was great as it was so different to the ones we have in England. We then went to a shopping centre to grab some dinner – lots of people went for KFC as we hadn't had one for a while – before we all walked home.

Today we were back at school again where we had another fun day! Our lesson before lunch was water activities, during which we did kayaking – and yes, most of us capsized…

After a busy day, we were moving on to explore the different ways of travelling in Bangkok. Firstly we went on a Skytrain which was just as busy as the London Underground at rush hour; then we went on a boat trip which took about forty minutes; and after this we took taxis to the River Tree House restaurant, where we sampled different Thai food.

We started off the day by celebrating Mrs Adamson’s birthday with Thai tea cake, presents and a card made by Miss Gratte!

Next it was time for some sightseeing at the Grand Palace, where we soon noticed that it was a lot hotter then anywhere else we had been! In our groups we may or may not have got a bit lost, but we managed to navigate our way back to the meeting point. Every building was so pretty and looked amazing. There were lots of guards, and out of respect for King Rama X you had to wear clothes which covered your shoulders, knees and stomach. Before you entered there were people checking your outfit, and if you weren’t dressed appropriately you would have to go and buy different clothes.

After the Grand Palace we set off to the MBK shopping centre, which sells a lot of probably fake goods. We bought lots of items, and even tried out haggling to work the price down as that's the norm. We were all very tired after this so headed back to the hotel for a swim.

Overall our trip to Thailand was quite simply AMAZING! We were so sad to see it end, although it was nice to come back to family and friends.

Thank you to Mrs Adamson and Mrs Gratte for accompanying us on the trip of a lifetime! And thank you to the staff and students of Harrow International School for making us feel so welcome!

Relive our trip with our photo album below!