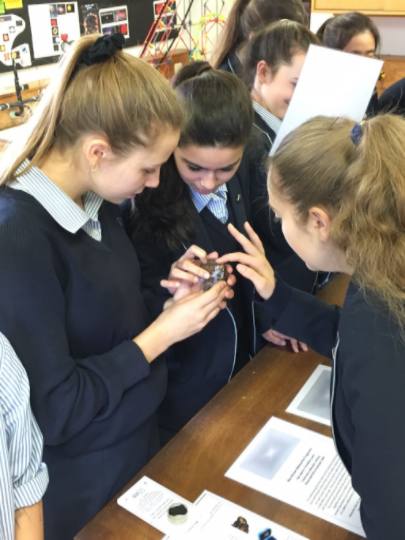 Students from the the whole school community, from Ruspini House right up to the Sixth Form were able to enjoy a unique, interactive experience of astronomy during their lessons. Highlights included getting up close and personal with some hand-sized meteorites, enabling students to touch a real piece of space. Included in the educational park is a 1.2 billion year old piece of Mars, and a 4.3 billion year old nickel meteorite – the oldest object you will ever hold in your hands! Our solar system I only 4.6 billion years old

The lunar samples, provided by the UK’s Science and Technology Facilities Council (STFC) were collected in the late 1960s and early 1970s during some of NASA’s first manned space missions to the Moon. A massive 382 kg of lunar material was brought back to Earth – mostly for use by scientists in their studies of the Moon, but small quantities were used to develop lunar and planetary science educational packages like this one.

Samples like this can tell us a great deal about where they originate, but we still have so much to learn! STFC is dedicated to providing science outreach programmes to inspire young people and complement classroom studies.

STFC’s Chief Executive Officer, Professor John Womersley, said “This is a great opportunity for young people to be able to see, touch and really experience such important and exciting messengers from space – turning science fiction into science fact. It’s an unforgettable experience to be able to hold such an important part of science history that has made such an incredible journey over millions of miles to reach us – and one we hope will inspire scientists of the future!”

Acting Head of Science Mrs Sears said “RMS is committed to the promotion of STEM (Science, Technology Engineering and Maths) education, so we were delighted that our application for the rare artefacts was successful. I had the chance to see the reaction of children throughout the whole school – from our youngest pupils in our Pre School, Ruspini House, through our Prep Department, Cadogan House and the Senior School and Sixth Form.  It was great to see their excitement and amazement. The Science department were put to the test by many inquisitive space related questions in both lessons and at extra-curricular events such as our Astronomy Extravaganza evening with guest speakers Dr Sarah Hutton and Hania Mohuiddin. We also had the chance to showcase our fantastic Astronomy facilities: the Planetarium and observatory as these sessions were fully booked within days. We are looking forward to holding similar events in the very near future, so watch out for more exciting news from RMS Science.  ”

Mrs Porter, Science Co-ordinator for Cadogan House, said  "The evening was fun and varied with girls and parents asking questions and exploring their understanding of space.  There was something for everyone.  The talk by Dr Sarah Hutton culminated in making a solar system across the hall helping even the youngest child understand the distances involved.  Girls were invited to design their own star constellations or to make a star finder and identify which ones are displayed on the walls.  Groups were also able to have the unique opportunity of visiting our on-site planetarium and all those individuals were amazed that we have such a facility on site.”

The students themselves had lots of thoughts on the evening: "I learnt a lot about the planets that I didn't know and it was amazing.  Now I might think about going and looking myself"

You can see a whole gallery of images here