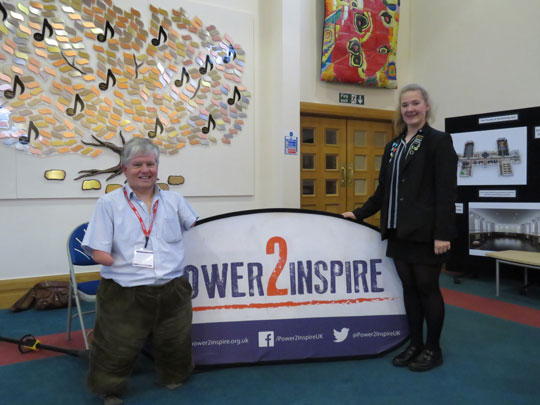 On Thursday 10th January, as part of the RMS Edge Sixth Form Lecture series, Year 12 had a visit from a truly inspirational speaker called John Willis.

John was born quadriplegic, but he has never let this disability stand in the way of him achieving his goals. When John was a child, his parents were told that he couldn’t take O Levels because he attended a school for people with disabilities. Thankfully, his parents realised that ‘their son had a brain’ and did not accept this judgement, moving him to another school where he was supported to take his O Levels.

This was only the start of an impressive academic career, which eventually led to John graduating from Cambridge University with a degree in Law. He then went on to qualify as a solicitor and practised as a litigator for 12 years.

Delighted to welcome the inspiring John Willis @Power2InspireUK for the first #RMSEdge lecture of 2019 on the theme of overcoming barriers – full house in the New Mark Hall with @RMSSixthForm and @MerchantTaylors pic.twitter.com/al7ig74q5N

John’s dedication and resilience were truly an inspiration for all of us to hear. Since founding the charity Power2Inspire, John has travelled around the country encouraging young people with a variety of different disabilities to persevere with the sports they love.

Power2Inspire was set up three years ago; as a charity it promotes sport for all and runs a variety of events, including Power House Games, which are bespoke sports days using adapted and inclusive games and sports. The thinking behind the charity is that John wants to ensure that disabled people are not excluded from sport, and to create “a world where everyone has the opportunity to participate in sport, regardless of body type, age, disability, religion or ethnicity, and can do so together”.

John’s talk has made us all realise that you should not take the easy things in life for granted; never stop trying to achieve your goals, just because someone has told you it’s impossible – because it is if you believe them!

Thank you so much to John for coming to talk to us, and to Mrs Freeman and Mrs Roberts for organising the talk.

Thanks for a fascinating lecture @Power2InspireUK and for bringing along all of the specially modified sports gear to demonstrate! A great message of perseverance and adaptation! ?? pic.twitter.com/SNQ20qJIwU

All doughnuts devoured @RMSSixthForm, with a little help from @MerchantTaylors Sixth Form for our first social event of the year. pic.twitter.com/wgjcmsm59y

Great visit to @RMSforGirls last week, thank you for having me.
Let's spread the message, sport is for everyone! pic.twitter.com/pj9SoUKIsL