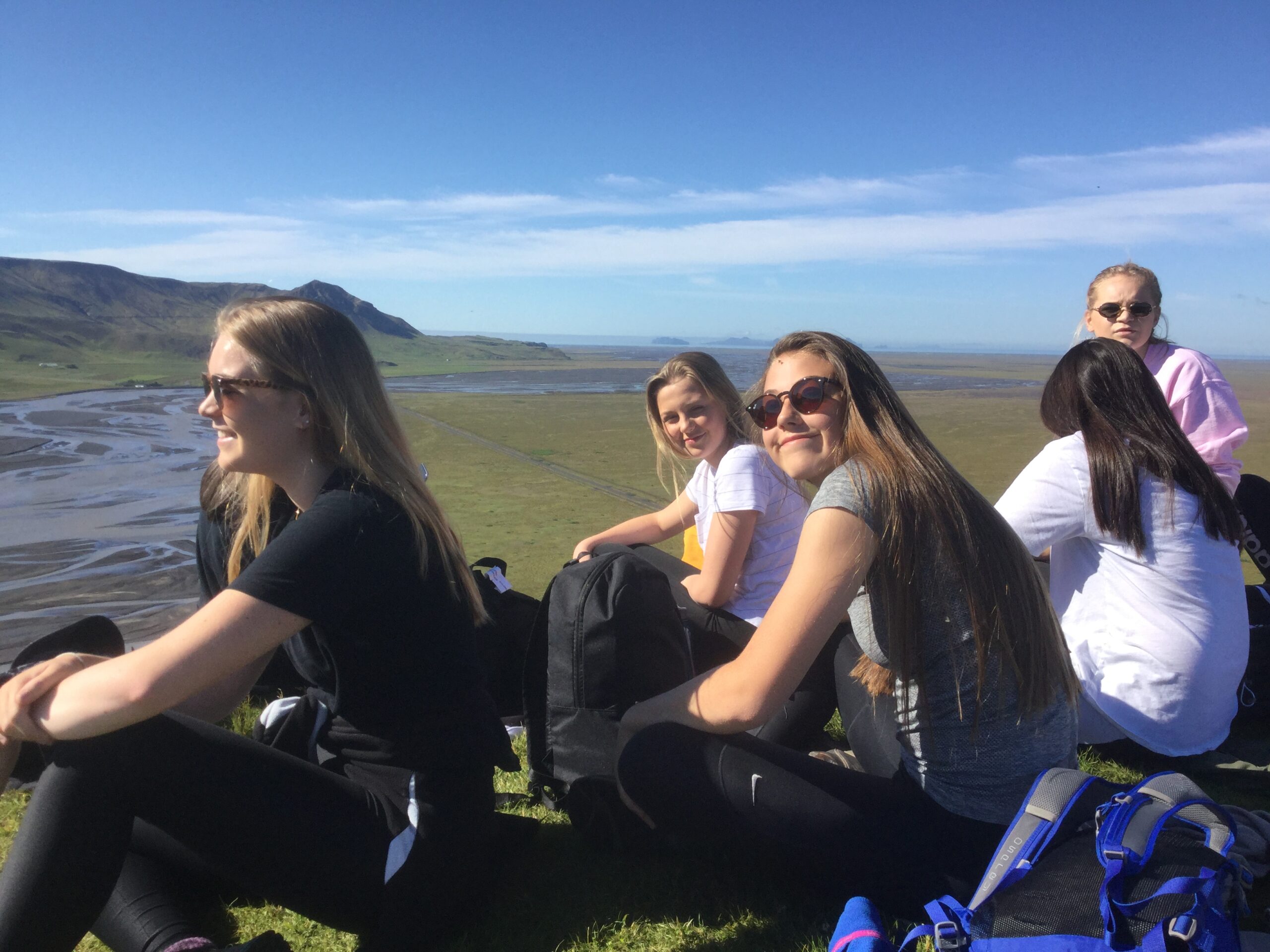 On the first day of the summer holidays, a group of sleep deprived but very excited RMS girls arrived at school with bags full of warm layers, ready to set off on our journey to Iceland, the land of ice and fire.

Our first stop was the Bridge Between the Continents, which spans the Alfagja rift valley, which marks the boundary of the Eurasian and North American continental tectonic plates. We saw solidified lava for the first time and ran up and down the rift valley!

Next we visited the Krysuvik Mud Puddles, situated in the middle of the fissure zone on the Mid Atlantic Ridge. There, we could see hot, sulfurous springs bubbling up from beneath the ground. We could also smell the sulfur. Very, very clearly.

After a long day of flying and driving we finally arrived at the hotel, where we were fed a delicious dinner. Some of us even took a dip in the hotel pool before going to bed, excited for the days ahead.

On the second day of our trip we woke up early for our first full day in Iceland. After a quick breakfast we got on the coach and went to our first stop, The Thingvellir National Park, a section of the major rift valley between the Eurasian and the North American tectonic plates that runs through the centre of Iceland. We climbed down and walked through the valley, amazed by the size of the rift. We found our first waterfall of the trip and were excited for what was to come.

After leaving the National Park we headed to see various geysir’s, most notably Strokkur Geysir which erupts every 6-8 minutes at a staggering 18m high! We spent time wandering through the different geysirs, being able to see the beautiful coloured rock and bubbling blue water, but yet again were met by the familiar smell of sulphur.

We drove to a small hill and climbed to the top of it (it felt like a mountain!) and looked out at the views over the lava fields and glacier valleys – it was beautiful. We also looked out over Helva – an island formed in the 1960s after a volcanic eruption.  Unfortunately we were stranded here for a couple of hours because our coach broke down, however it was sunny and the scenery was amazing so it wasn’t that bad!

We had lunch then headed to our next visit of the day, the Gullfoss waterfall. We climbed straight up to the viewpoint from which we were able to see the massive double tiered waterfall in its entirety, complete with a rainbow. By walking further down we were able to get a closer look and were amazed at just how enormous it was! After taking far too many pictures we walked back to the coach.

After this we drove to a beach with amazing stone columns. These were formed by cooling lava in the sea. We climbed on these columns and looked at the puffins flying from the cliffs. There was a wedding photoshoot happening here too which we were all very interested in too!

That night we spent the evening swimming in the pool. Bed time arrived and the sun was still shining – it never got fully dark!

The next day we departed from the hotel at 9am and we travelled to Landmannalaugar, which is a lava field situated in a valley between colourful mountains at the dark edge of the field. Many hot and cold springs create a bathing warm brook, where people bathe. The banks of the brook are boggy but it is forbidden to use soap. The mountains are split with gullies and gorges, one of which, the Jokulgil, is about 13 km long. Furthermore, we walked (supposedly an easy walk) around fumeroles and steam vents, showing that hot magma is not too far beneath your feet. Around the fumerole mouths, the variety of colours indicates the various minerals that are deposited there from the volcanic steam.

Later we all got dressed into our bathing suits and bikinis and began swimming in a geothermal heated stream. Bubbles of hot water rise up from the fine gravel streambed causing a lovely place just to relax. Then after a long hard day of walking and swimming we left Landmannalaugar and arrived at the hotel awaiting our dinner and finding out that the Wi-Fi had finally started to work once again.

The next day we went to the famous Blue Lagoon. Before we could relax and swim in the lagoons geothermal sea water we had to sprint from the warm building into the lagoon, I think it was the fastest any of us had sprinted.

There were face mask stations around the lagoon and we all took advantage of them and covered ourselves. It was a change from the walking and hiking and an experience I will never forget.

Having departed from the Blue lagoon we continued to the capital of Iceland, Reykjavik. We had the chance to explore the magnificent museums and sights of the city, as well as a bit of shopping. The church, hallgrimskirkja is visible from 20km away.

After a long day out we all got back on the coach to go back to our hotel, looking at the unique and barren scenery made the journey go quickly. Once we got back we had some free time to reflect on our day and relax.  After dinner some us of took advantage of the heated swimming pool outside as well as the Jacuzzi.

Thursday 10th July, was our last and final day in Iceland. After checking out of Hotel Ork, we said our goodbyes and departed for the Lava museum.

After an hour's drive we eventually arrived at our final activity of the trip. The Lava museum is a brilliant museum about the volcanoes on Iceland. It tells you their history and taught us about what happens inside a volcano. There was a fantastic graphic that showed what was going on beneath Iceland! We walked through a corridor of ‘ash’ that was terrifying. I would definitely recommend this museum.

Once we departed the lava museum, we took in everything from this amazing opportunity of a trip and arrived at Reykjavik airport. We checked in and were allowed some free time to get last minute gifts and dinner.

Many of us didn’t want to go home, but were relieved to be back after a long flight, and which majority of us was looking forward to sleeping in our own beds.

This was a once in a lifetime opportunity and was such an amazing, informative trip. Thank you to Mrs Walker, Mrs Freeman, Miss Cook, Miss Warr and Mrs Beedell for making this trip so momentous.

Here are just some of our photos from this fantastic trip