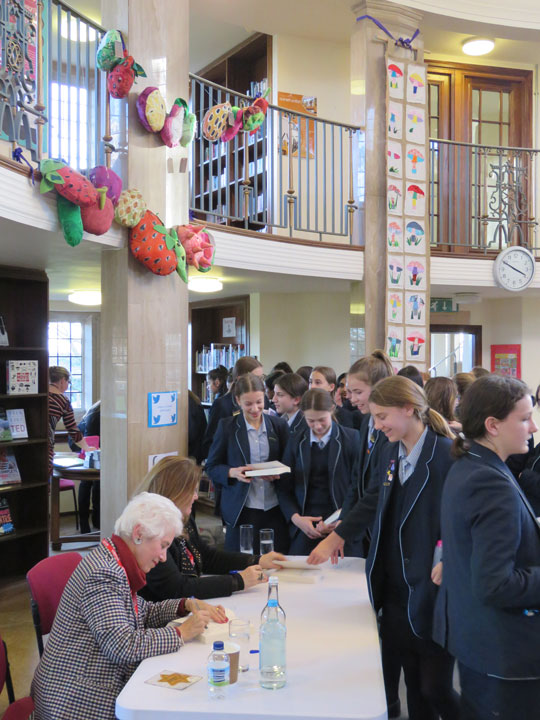 On Thursday 7th February we were honoured to welcome Wendy Holden and Eva Clarke to RMS to talk to Year 9.

Wendy Holden is the author of the biographical book 'Born Survivors', which tells the story of Eva Clarke and her parents, as well as two other babies born during the Holocaust. Here are Isabella's impressions of the talk:

"The smoke clogged their noses. The cold winds clawed at their skin. German commands rang in their ears. This was the reality for millions of Jews, homosexuals, Jehovah Witnesses and Roma sent to the concentration camps just for being different and not part of Hitler’s superior race, with blonde hair and blue eyes. Wendy Holden and Eva Clarke told the story of the many people who were subjected to the horror and terror of concentration camps. What made this even more special was that Eva Clarke's birth was a miracle of human survival, one of only three known babies born from the starving, appalling conditions of the Mauthausen Concentration Camp. She was a miracle, a fragment of hope; her mother’s story was encapsulated in her words. We were transported to a different world of death and pain and the hope a small baby held."

A great talk to students today in the beautiful library of the Royal Masonic School for Girls, in Herts. They were very engaged and engaging. Thanks to all for organising @RMSforGirls @CWBookshop @LittleBrownUK #BornSurvivors pic.twitter.com/X4M6RWVGN7

Fascinating life stories to hear, and undoubtedly to read too – lots of signed copies of #BornSurvivors bought! ?? pic.twitter.com/Vul1axHgc0

We were honoured to welcome @wendholden and Eva Clarke to share the deeply powerful and moving story behind their book 'Born Survivors'. A lot of students and staff will be reading their new copies tonight. Thank you so much for visiting us. @RMSreaders @RMSforGirls @CWBookshop pic.twitter.com/saTSMFHhVt