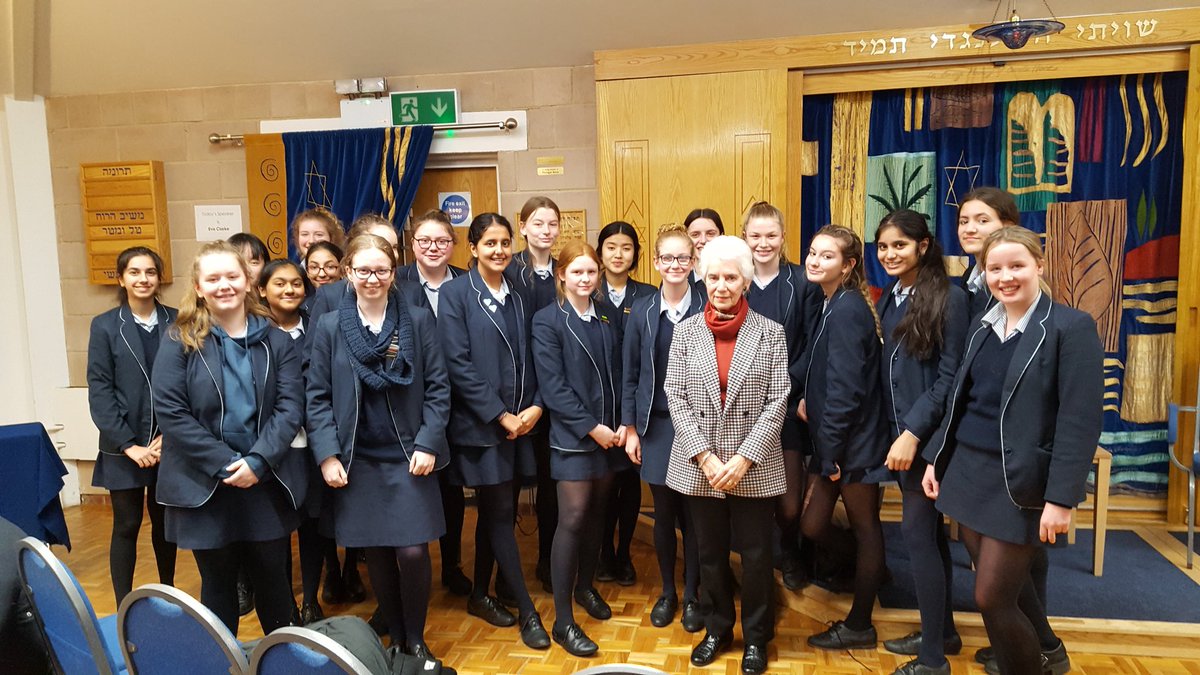 Early in February, Year 10 Religious Studies students went to Northwood Synagogue to spend the morning remembering the Holocaust  through a series of workshops. We also had the opportunity to listen to the remarkable story of Eva Clarke, a survivor of the Holocaust.

After a warm welcome, we were split into groups for the workshops; our group went to a small room upstairs in the synagogue where we were lead in a session by a volunteer. She started off with a quiz about the Holocaust, where we learnt about the when, where, and who of the events. Almost every European country was affected, and there were far more people involved than any of us had realised. Not only was Hitler and his government involved, his allies such as Mussolini and the leaders of the occupied countries facilitated it. There were also many more people persecuted, too. Jews, homosexuals, gypsies, Roma and Sinti people, Jehovah’s Witnesses, disabled people, Communists and others were murdered under Hitler’s “racial hygiene” programme. We then learnt about the Nuremberg laws,  laws against Jews in Nazi Germany during the 1930s.

After a short break, it was time to listen to Eva Clarke’s fascinating story. Eva is a Holocaust survivor, whose story began when her mother and father, Anka and Bernd, were sent to the Terezin Ghetto in Czechoslovakia, where the men and women were separated.  Sadly, during this time, Eva's older brother died, and by the time the couple left the ghetto three years later, Anka was pregnant with Eva.

Bernd was taken to Auschwitz in early autumn 1944 and, incredibly, Anka volunteered to follow him, despite the fact that she was pregnant. Heartbreakingly, Anka never saw Bernd again; she later found out that he had been killed at Auschwitz in January 1945, just weeks before the liberation of the camp by the Red Army.

Although of course, it was tragic that Eva’s brother had died, if Anka had arrived at Auschwitz with a baby, she would inevitably have been sent straight to the gas chambers. So Anka, not visibly pregnant, was allowed to work and sent to an armaments factory for six weeks in Dresden, where she became steadily weaker. By the spring of 1945, the Germans were evacuating slave labour camps, so Anka and her fellow workers were put onto filthy, open, coal trucks to be sent to Mauthausen. When Anka saw the name of this notorious camp, she was so horrified that she went into labour and Eva was born without any medical assistance in the back of a coal truck. Anka and Eva were both tiny and skinny, malnourished and near death. If the camp’s gas chambers hadn’t been blown up, and if the Allies hadn’t liberated Mauthausen just days later, it is highly unlikely that either of them would have survived.

Listening to Eva was an incredibly moving experience; even though Eva is not old enough to remember the atrocities committed by Hitler and the Nazis, her account of the circumstances her parents were forced to endure was horrifying.  To young people today, the Holocaust can sometimes feel like another "historical" event that happened a long time ago the enormity of which is hard to fully understand; therefore we feel extremely privileged to have been able to listen to the personal, heartbreaking story of one family, which really put this historical event into a human context. Listening to stories such as Eva's cannot fail to remind anyone that we must all do our utmost to ensure a similar atrocity never happens again, and that we all have a responsibility to stand up against discrimination in all its vile forms.