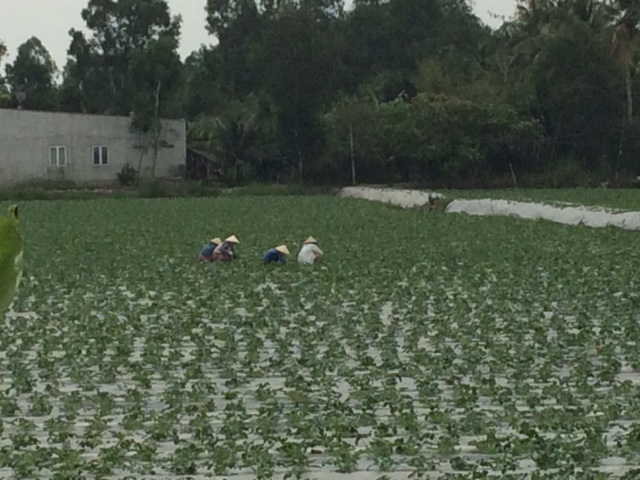 At the start of the Easter holidays we ventured on a dream trip to Vietnam.  Here, we were to learn about the culture and history of this fascinating country.  Our cases loaded with flip flops and sun cream we prepared for the long journey via Abu Dhabi. Landing in Saigon and we were hit with a wave of heat.  The city is busy and bustling and certainly a bit of a culture shock.  Our first day was full of sight-seeing led by our enigmatic tour guide, Yee.  We visited the Reunification Palace, which was grand and one of the few very modern buildings in Saigon.  We saw some of the beautiful French colonial building, including the Notre Dame Cathedral and the central post office which was designed Gustav Eiffel before he made the Eiffel Tower.

We visited many temples in the city one the most astonishing being the Emperor Jade Pagoda.  It was built by the Cantonese community around the turn of the 20th century and is still buzzing with worshippers, many lounging in the front gardens.  It is one of the most attractive pagodas in the city. Dedicated to various Chinese-Vietnamese divinities, in a mixture of Taoist and Buddhist styles, the pagoda houses numerous statue s and delicate woodcarvings with intricate tiles on the roof.

We visited Vietnam's first traditional medicine museum, the FITO Museum which displays an amazing collection of 3,000 items relevant to the development of traditional Vietnamese medicine. Implements used to prepare indigenous herbs, objects commonly found in traditional pharmacies as well as ancient books and documents on traditional Vietnamese medicine can be seen in the galleries.  We all stocked up on special herbal teas here that are meant to make us all look youthful and live forever… or  so we hope anyway!

One of our main reasons for visiting Vietnam was to learn more about the impact of the war between the Vietnamese Communists and the Americans, fought in the 1960s.  The Americans did not want the political system of communism to take over the whole of the country and sent soldiers there to try and stop the Vietcong, who were the Vietnamese communists, from taking over.  This was a bloody and catastrophic war for the country as the American forces dropped thousands of litres of chemicals on Vietnam in an attempt to destroy the jungle there, in order to be able to bomb it more effectively.  We visited the War Remnants Museum which contained horrific images and stories of the war, and included a real guillotine, a simulated "tiger cage" prison and jars of deformed foetuses blamed on the chemical Agent Orange

The Vietcong were known for digging deep tunnels all across South Vietnam during the war and we experienced these when we visited Cu Chi.  Here tunnels have been preserved and you can go down them and see what it was like for fighters in the Vietcong.  There was barely any room at all, it was hot and dark.  We also could climb in some of the holes that the Vietcong would have climbed through.  Unfortunately for Mr Grogan his department didn’t want to let him out of the hole!  We all felt very brave as we emerged from the tunnel unscathed and feeling like we’d done some hard work!  Mr Broome and Mr Grogan particularly enjoyed themselves as they were allowed to go and fire some real life guns on the shooting range. 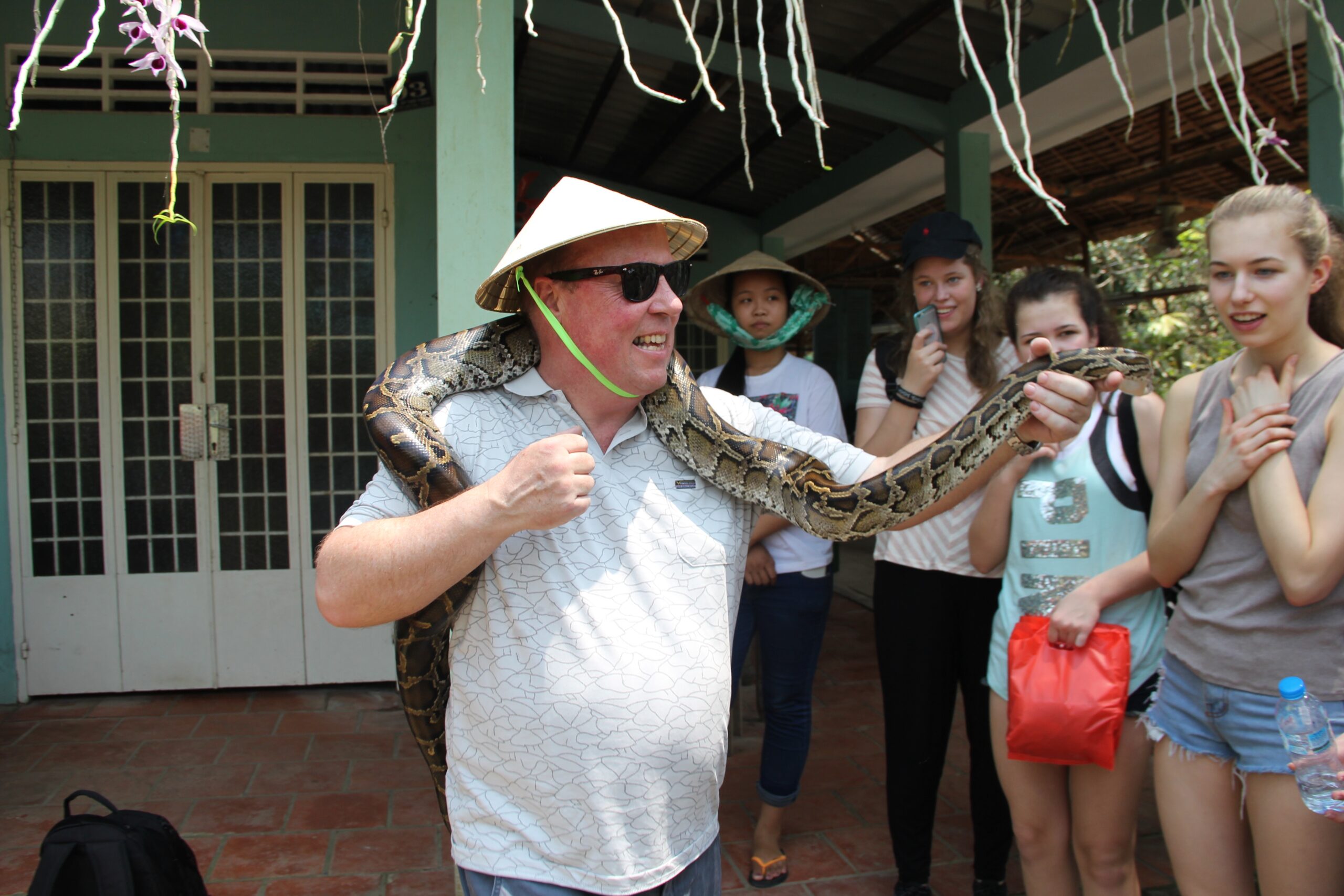 We had an afternoon at leisure when we visited Saigon Zoo where we saw a whole range of animals from elephants to giraffes to lions.  Many of us spent some time of the fairground rides and let some steam off on the dodgems!  We followed this up with a trip to a water puppet show which had to be seen to be believed.  This was typical example of Vietnamese culture and a real treat to see. 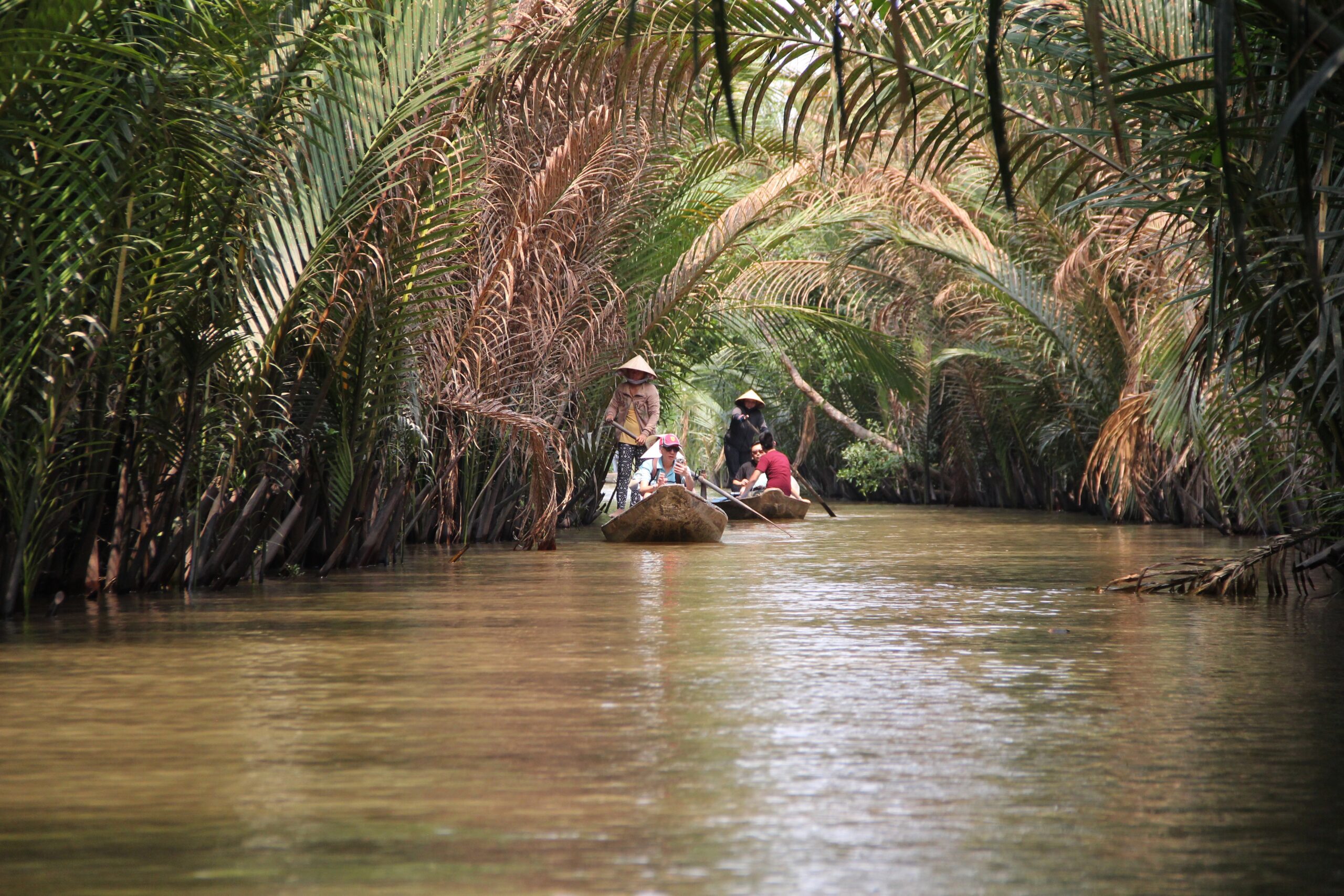 country.  We took a boat ride down the Mekong River, taking a glimpse at the Delta scenery, houses built on stilts and local fish farms along the way. We cruised among the islands named Dragon, Unicorn, Turtle and Phoenix Islands. We then stopped off at a honey farm where we tasted freshly produced honey and peanut crackling.  Round the back of the farm we were greeted with a surprise guest- a rather large carpet python who we were given the chance to hold.  Mr Broome was straight in there for a hold, whilst some of us stayed well back!  We then enjoyed a gentle bike ride on some vintage Vietnamese bikes through a tropical orchard garden.  Saskia took a trip on the back of a moped and rode along next to us!  We then ate fruit and enjoyed some traditional Vietnamese music before our boat ride back.

Our tour guide Yee was a fun character who spent a lot of his time teaching us some Vietnamese words and songs.  By the end of the first day we were all singing along to Vietnam, Ho Chi Minh! very loudly, particularly Minty!  Yee also treated us to a song he wrote called Honey I love you where he sang to us about his girlfriend leaving him all alone.

No RMS trip would be complete without a bit of shopping.  We visited several large markets in the city and soon got to grips with bartering for the produce we wanted to buy.  We filled our bags with Vietnamese traditional hats, t-shirts, magnets, baggy trousers and plenty of gifts to bring home.

Our final night was spent in a luxury hotel in the centre of Saigon which gave us the chance for some relaxation around the rooftop pool.  This also meant that quite a few of us went home with some very questionable tan lines and burnt bits!  We rounded off our trip with a mocktail on the roof of our hotel as we watched the sun go down.  This was followed by a night of karaoke, which we have promised we will never mention again…..

We ate so many new foods in Vietnam.  Every night we dined at a different restaurant, leading up to our final day when we dined in a restaurant that is in the top 100 restaurants in the entire world.  One night we ate on a cruise liner as we sailed down the Mekong River and experienced traditional Vietnamese dancing.  We did dare each other to eat some strange and wonderful foods in our evening game of food roulette, but no-one dared try the baby chick that had been boiled alive in its shell!

Experience of a lifetime 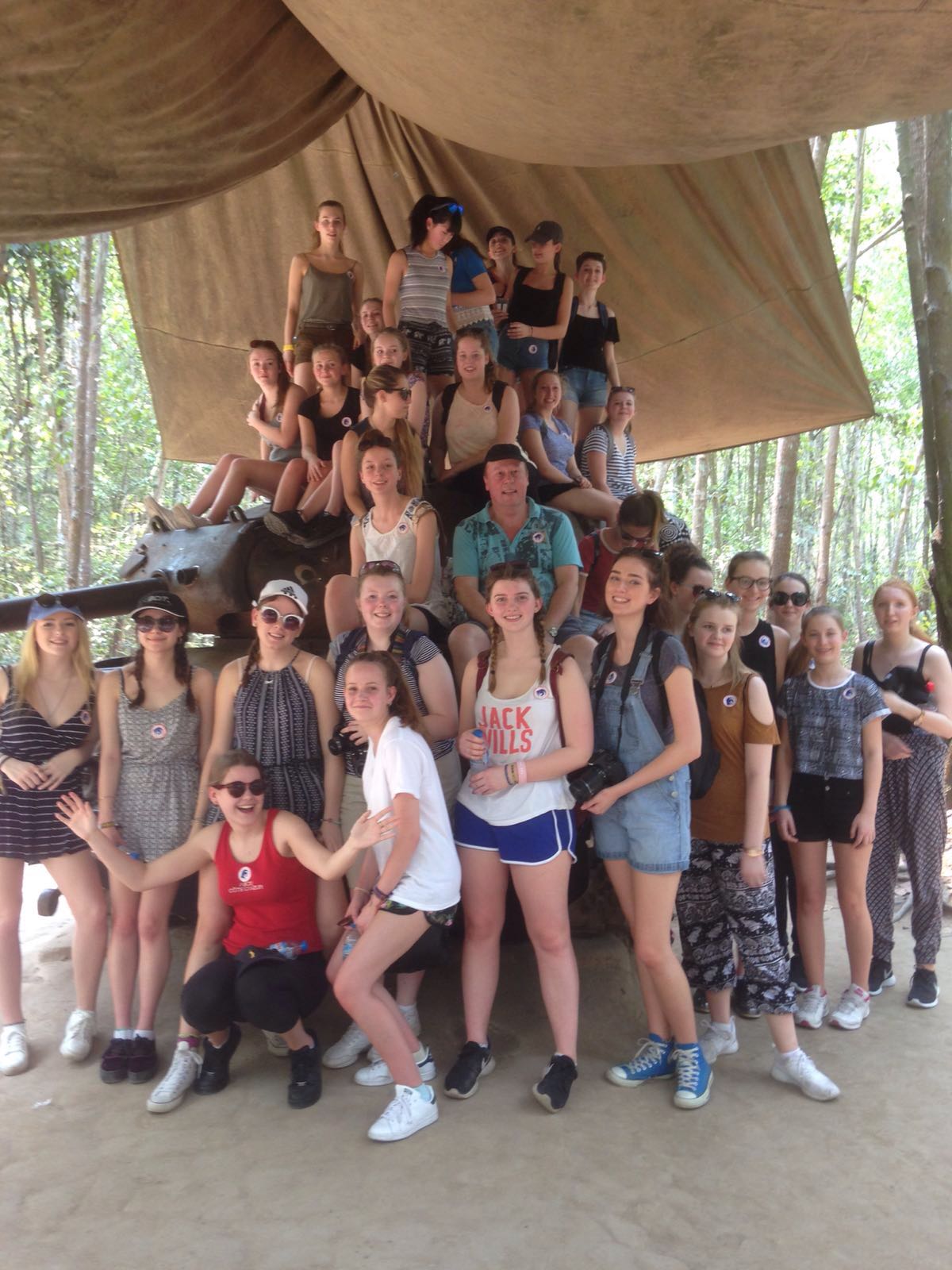 Our trip to Vietnam was an unforgettable experience.  We have learnt so much about the culture of the country and taken ourselves out of our comfort zones.  Every day was jam-packed with culture and it was great to experience this with all of our friends.  Our tans may have faded but our stories and memories will last for many years to come- much longer in fact than Miss Simmonite’s handbag from Ben Thanh market