Head’s Blog: September is a time for fresh starts
Skip to content

Head’s Blog: September is a time for fresh starts 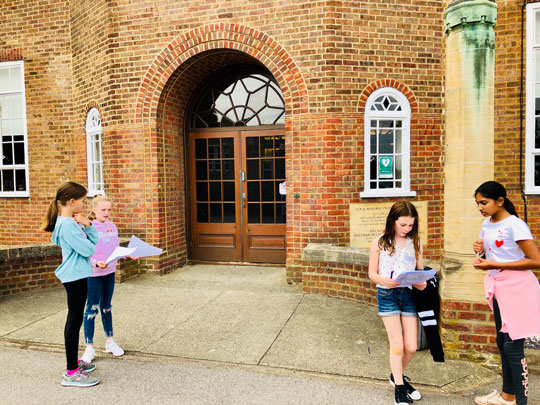 "If summer must end, and if we must go back to school, let’s do so with crisp white shirts, polished shoes, a brand new pencil case, and some serious good intentions."

September is a time for fresh starts.  There is always a new-broom feel about September in my mind, a sense that it is time to stop mucking about and to get down to business.  There is something special about watching the arrival of pupils for the first day of Michaelmas term: the smiles, hugs and jokes, the tales of summer fun, the sheer joy at seeing friends again.  I’ve witnessed this spectacle every September for almost twenty years.  It is always a brilliant event.

This year, on the first morning I asked pupils, in front of their year group, how pleased they were to be back at school, on a scale of one to ten.  “Ten” said the Year 8 pupil, of course.  “Seven” replied the Year 9 pupil, (obvs).  I got a “Nine” from a Year 11 student, and an “Eleven” later in the Dining Hall from a Sixth Former who, thankfully, is not taking A Level Mathematics.

I have spent much of these first days following our new Year 7 pupils.  We have decided to provide them with an entire “Induction Week” this year, wishing them to better get to know one another, and better to understand the culture of our School before lessons begin for them in earnest next Monday.

First afternoon of a week of Induction activities with our new Year 7 pupils @RMSforGirls. They spent part of today on a quiz in groups around school, and will learn about our Values and expectations over the coming three days. #theyaregreat#thisRMSgirlcan pic.twitter.com/Ew6QkAM7KQ

On Wednesday afternoon, with Ms Cassidy and Ms Walker, Year 7 were all in The Great Hall, for the first of two sessions this week on our My Learning values, the 4 Rs of Reflectiveness, Resourcefulness, Resilience, and Reciprocity.  It was the first two of these values for this session.  “I want to get you talking about reflectiveness and resourcefulness” introduced Ms Walker, “What these words looks like in practice, what it feels like to experience them.”

After a couple of starter tasks the year group were all engaged in making the longest paper chains possible in small groups, without glue or scissors, using just five sheets of A4 paper. The girls dived in quickly, sharing ideas and working together, but were shocked by how little they had progressed when time was called on the task.  They were then asked to reflect individually, in silence, to consider if there were different ways of approaching this task, whether their group’s approach was the best one, and also why it was important to reflect.

When the girls were allowed to return to their tasks a second time, far greater discussion within groups was evident across the year group before their reflections were acted upon.  New ideas were then implemented and when time was called second time around, the longest paper chain (constructed by Amilia, Ruby, Inez, Alissa, Aleesa and Komachi) stretched almost the entire length of The Great Hall.

The My Learning session @RMSforGirls today as part of Year 7 Induction Week was great to see. First the girls had to make their longest paper chain from 5 sheets of A4 without scissors or glue. #4Rs. Reflectiveness and Resourcefulness today. 1/2 pic.twitter.com/2vmTLTiZhN

Ms Cassidy then introduced the value of Resourcefulness, giving the girls just eight minutes to decode a challenging puzzle using the resources in the hall.  Year 7 proved themselves up to sticking at and solving this tough task on the whole, with the group of Mia, Niamh, Kavan, and Ishta being the first to reach the correct answer.

Reflection this time was focused by Ms Cassidy on the strategies and skills that had been applied to reach the solution.  Resilience was required, one group replied, and also the resourcefulness of looking at the symbols already solved around the missing letters in order to provide context, and then of asking for a little help to get a prod in the right direction.  “Nothing wrong with that” Ms Cassidy assured the pupils, “It’s all part of how we learn”.

Then they had to decode this sentence. 4Rs as part of Induction Week for Year 7 @RMSforGirls. They loved the challenge, were prepared to make mistakes, to reflect on and question their thinking, and to begin to get the My Learning culture at our school. https://t.co/JKKATQ8i8r pic.twitter.com/RuBne3xk9P

The 4 Rs at RMS are learning values that we expect the girls to apply in all of their lessons throughout their seven years in Senior School, and they were all in evidence in Ms Beedell’s Year 11 Biology lesson that I joined on Thursday afternoon.  The girls were first set up on Google Classroom to submit all of their homework this year – “Genius” one pupil declared – before going through the risks and variables of one of their ten required practicals in Biology that would involve them heading into The Garth and The Lowers next week for some fieldwork using a quadrat.

This class, which I had entered at random, were a top stream Science group who over the thirty minutes of my visit revealed to me not only their application of the 4 Rs but also their excellent summer homework covering two units, and the extent of their powers of recollection in using some of the trickier subject-specific vocabulary that Ms Beedell questioned them on.

One of the things that I love about our students is their desire to always take on new challenges.  Eleanor, who I was sat next to, told me about her plans to study Biology, Chemistry, and Psychology next year for A Level, but equally of her determination to start singing in the School choir “because I feel like I have the capacity to take that on too this year”.  I couldn’t be anything but impressed, as ever with our pupils.

September has always been a good month to make a resolution to stick at, and Eleanor was set upon not just GCSE success but also the challenge of committing to a new group.  My own September resolution this year is to provide any readers with a weekly update of life at RMS; the pleasures of life here in our learning community are just too enjoyable not to be shared.

The Year 7 pupils @RMSforGirls also had a ‘Great Expectations’ session involving class discussion of Learning expectations and acting out responses to a series of scenarios. A great start to Year 7 Induction week. #gettingourculture#thisRMSgirlcan pic.twitter.com/joG1N5ZfN9