Head’s Blog: Performing Arts in the limelight
Skip to content 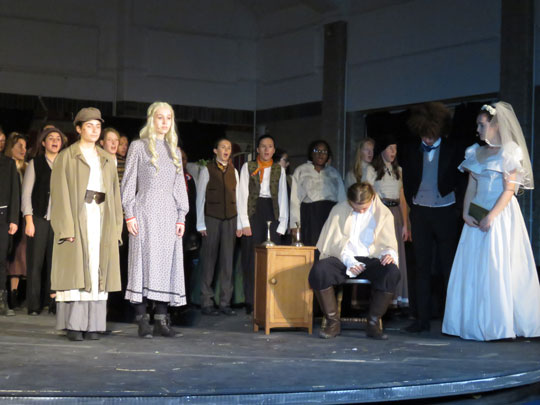 It has been a big week for Performing Arts at RMS, with the Senior School performance of “Les Misérables” wowing sell-out audiences all week.

Those who were fortunate enough to see it have commented repeatedly on the high quality of the performances and the production, and it is true that the acting, music and direction was of a very high standard. I have thoroughly enjoyed every minute of each of the individual student’s performances.

The first two nights of “Les Mis” @RMSforGirls have been incredible. Two cast, two standing ovations, two great nights of amazing theatre. The musicians, tech crew, and backstage team have all been key to an epic production. #lookingforwardtothursdayandfriday pic.twitter.com/6wG5goXW6J

However, what I would wish to particularly focus on in this post is the quality and importance of the entire company” of “Les Mis” rather than the incredible performances of very talented individuals.

The professionalism of every one of those students, both actors and those working off-stage to ensure that the on-stage show was a success, has been incredible to witness.

Each night the company has coped superbly well with different challenges, and always without missing a beat, and so the audience was aware of nothing more than the pleasure they felt watching a high quality show.

I know that the students have developed new friendships across year groups and that they have created memories that will last lifetimes. I am sure they will share with me their appreciation not only of the work of Mrs Isherwood, Mr Hyde and Mrs Heaffey, but of all of the teachers, support staff and dedicated parents who have supported them in making the production a great success.

Final performance tonight of @RMSPerfArts #LesMiserables after an incredible run this week – huge congratulations to all involved, and good luck for tonight! ?? pic.twitter.com/MnrcPXhQA7

It was a real privilege to meet many supporters of RMS for Girls at our Benefactors’ Reception on Tuesday evening. Through their support, we have been able to undertake the renovation work to former boarding house, Alex, soon to become the new home of the Faculty of Performing Arts.

The images below show the plans for the new building, which will include a drama and dance studio, filming and recording studios, practice and rehearsal rooms and a recital hall. It will be a fantastic addition to the school and I know the girls are looking forward to its completion enormously.

Once the renovation work is complete, the Giving Tree that currently resides in the New Mark Hall, will be moved to its new home in Alex in order to recognise the generosity of our parents, alumnae and the wider community towards this project.

If you would like to contribute to the final fit of the building we would welcome your support. With the help of the whole school community, we will be able to create a world-class centre for the Faculty of Performing Arts which will benefit both current and future RMS girls. For more information and to make a donation to the campaign please follow this link or otherwise please contact Lucia Hull, our Development Manager.