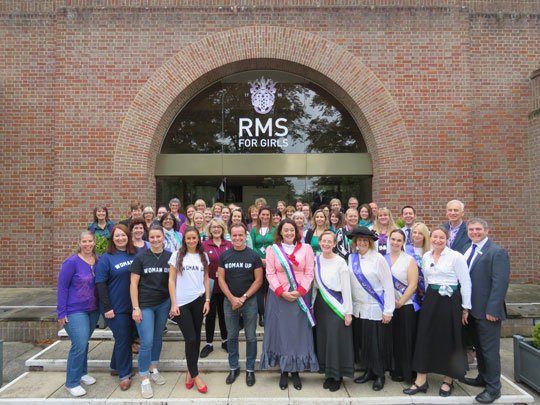 The first full week of term in Senior School saw both lessons and Drill rehearsals begin in earnest.

The first of our new Late Buses took home students on Tuesday evening who had been studying extra Latin, Astronomy or Coding after school and those participating in netball and hockey trials; and the annual Charities vote took place in Chapel Assembly after moving presentations led by our Charity Prefects Flo and Rachel.

Here are some of them #voting for the school #charity @RMSCharities pic.twitter.com/Le7HFCmd5W

We all await the results of the students’ vote in Friday’s assembly of our chosen School charity for this year.  Reverend Quill also set a tone for the year during Chapel Assembly, emphasizing the import of kindness to all, stressing that no student should ever feel alone at RMS, and reminding all that there are always many students and adults with whom we can talk when we’re down and troubled.

As ever, there was something for everybody to enjoy throughout this week.  The pupils that I spoke with singing the praises of favourite new teachers, the return of STEM Club, rehearsals for Les Mis, and being selected for sports squads.  Personally, I greatly enjoyed meeting some of our students in years 8 this week to congratulate them for making exceptional academic progress in their year group last year.  Eva, Louisa, Sophie and Angelina are everything that we wish for in an RMS girl in respect of always trying their very best and being committed to self-improvement.

Aspiring director Ella comes back to assist with the direction of Les Miserables.#alumni #fromonegenerationtothenext#thisrmsgirlcan pic.twitter.com/r9OobqpfqX

However, the undisputed highlight of the first full week back at school was Wednesday’s Focus Day, Women Empowered, celebrating the centenary of voting rights for women in the UK.  The topic was chosen by the students themselves before summer, with the aim of empowering RMS girls to think differently about the possibilities of being a woman in the twenty first century.  To take a day away from our regular curriculum, once a year, coming together as a whole school community to explore a topic, is one of the joys of the year at RMS.

The full list of activities, talks and learning was both extensive and inspirational, too long to merely reel off here.  Some of the highlights for the girls were talks on mental well-being, and for older students about sexual consent, but also hearing from former students Katherine and Victoria, one a conservationist, and the other an international athlete who has competed in the Commonwealth Games, about their journeys since leaving school a decade earlier.

Year 9s and 10s hearing from two sisters and former students @RMSforGirls about their lives since school. Katherine is a conservationist, while Victoria is a geneticist who has also competed in the Commonwealth Games and other tournaments in shooting! ‍ #RMSWEDay pic.twitter.com/ZV04HTXwHi

Physical activities such as Wing Chun martial art and rugby were popular with younger students, with Year 8 particularly enjoying their engineering sessions with the Oxford Brookes racing team.  And, in the words of Mr Dacanalis, the workshop with the UK Space Agency showed the girls that “The sky is not the limit!”

We all came together in the Great Hall after lunch to sing, to hear students’ speeches and newly composed poetry, and to have our new Head of Music, Mr Werner, sing solo before leading us through a series of favourites from suffragette marches.

We heard that pupils in Cadogan House had also learnt about the history of the suffragettes, which had then led to Year 4 girls marching through Cadogan House protesting for women’s rights.  It was wonderful to hear that learning about the past had got the girls up on their feet to act out a protest, with the day as a whole hopefully inspiring the next generation to protest, to first insist on a better world with equality for all, and then to lead it.

Year 4 learnt about the suffragette movement. They marched around Cadogan House protesting for women’s rights! pic.twitter.com/s3N1DoaVLz

The day came to a climax for Senior School pupils with a grand parade around The Garth, with each of the houses proudly displaying the banners, costumes and t-shirts that they had made during the day while singing songs that each House had composed, and performing dances that the girls had created.

Atholl Sussex leading the parade around The Garth @RMSforGirls.#RMSWEday pic.twitter.com/0Z4rRe23Nn

As with the reenactments in Cadogan, it was both tremendous fun and wholly inspiring, and we now await with the final House results from the day in Friday’s assembly.  At the end of Wednesday, as the students left The Garth, there remained on the grass a giant WE filled with pounds coins left by the students, the first contributions to this year’s School charity.

The WE set up for the coin trail #focusday #charity pic.twitter.com/sASRYyr541