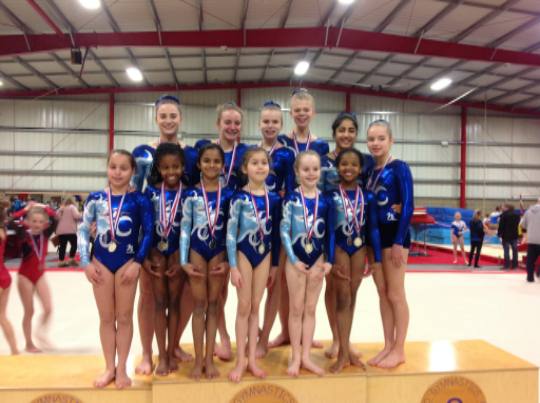 Huge congratulations to our Prep and Senior School gymnasts who represented the School at two different competitions this weekend.

On Saturday 4th February, three RMS teams took part in the British Schools Gymnastics Association Milano Eastern Region Competition. Our Under 11 team (Zahava, Ynes, Isobel and Sowmiya) came second, the Under 13 team (Beatrice, Livvy, Thalia and Tara) came first, and the Under 19 team (Rachel, Miranda, Isabel and Amelia) came second.  With these fantastic results, all three teams will now proceed to the National Finals at Fenton Manor, Stoke on Trent on 10th and 11th March.  This is the first time that ALL the RMS teams entered have made it through to the finals, so we are incredibly proud of their achievement.

As if this wasn't already enough success for one week, the following day, the squad then participated in the Easter Region Acro Competition. In the Pairs Competition, our Under 11 pair (Zahava and Zissel) came first, and the Over 14 pair (Rachel and Gabi) came second.  Zahava and Zissel therefore qualified automatically for the National Finals in May.

In the Team Competition, both the Under 11s (Zahava, Zissel, Ynes, Sowmiya, Isobel and Ophelia) and the Over 14s (Serena, Manaalee, Isabel, Miranda, Ella and Beatrice) won the competition and are both straight through to the Finals, again at Fenton Manor, on 6th and 7th May.

Following her success in the pairs and team competition, Zahava also competed in the Under 11 Tumbling category, coming second, and therefore progressing to the Finals.  Amelia then went on to win the Under 14 Tumbling title, also qualifying for the finals.  Congratulations also go to Tara, who came third, narrowly missing out on a finals spot.

Well done to all the girls who competed, to Miss Lusted from the PE Department, and the team of dedicated and skilled gymnastics coaches who help coach all the girls, in particular Mrs Charafeddine.  Thanks also go to Serena and Manaalee, who have been School Gymnastics Captains for the last two years, and who work closely with the younger girls, creating routines and supporting the whole team in all their endeavours.

We look forward to bringing you the results of the National Finals in March and May.

You can see a selection of photographs from the weekend's competitions here: