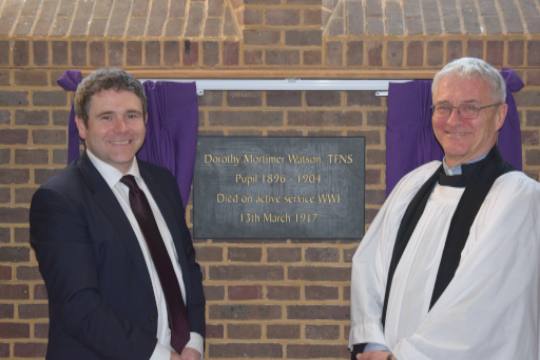 A special memorial service was held in the Chapel on Monday 13th March to commemorate a former pupil, Dorothy Mortimer Watson, who died on active service in WWI 100 years ago to the day.

Miss Watson was with the Territorial Force Nursing Service in Malta and had left the School in 1904. Honoured guests included Sue Bush, Col Comdt QARANC (the service that TFNS became later); another former pupil, Anne Grimwood, who had been a QARANC officer and who left the School sixty years after Dorothy; the Director from the Library and Museum of Freemasonry and Mr & Mrs Greep from Harrogate where Dorothy had lived and worked before transferring to Malta.  You can read more about Miss Watson's life here

Pupils had researched and produced creative work on the topic. This formed the central part of a School assembly tied in with International Women’s Day.

Dorothy’s name is commemorated on a WWI plaque at Harrogate hospital and now she is remembered at her alma mater, the plaque being unveiled on the centenary of her death.

Photographs of the service, taken by Ms Brooks and Mrs Sharma can be viewed below.