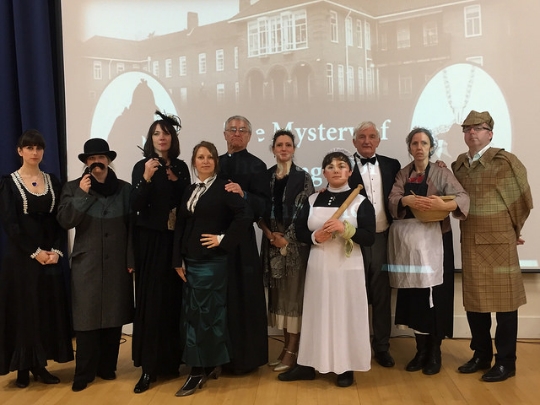 We like to start the Hilary Term with a Writing Day. To build on our work last year we focused on another mystery. This time we took the children back in time to 1896. A number of locations in Cadogan House were dressed with Victorian items. The story centred around the disappearance of the Singapore Diamond from Lord and Lady Pilkington’s home (Cadogan House).

The girls took on the role of detectives to try and uncover the truth. There were nine suspects who were at Cadogan House at the time of the theft. The girls interviewed each suspect and watched a video which reconstructed parts of the dinner the previous evening at the Pilkington estate. The day finished with the children declaring who they felt was the thief before the grand unmasking in the final assembly. It turned out to be Lady Beatrice (Mrs Espinoza)!

Each year group captures the excitement of the day in different forms of writing. We were also delighted with the questioning skills the girls showed from Reception to Year 6. It was a great beginning to the term!