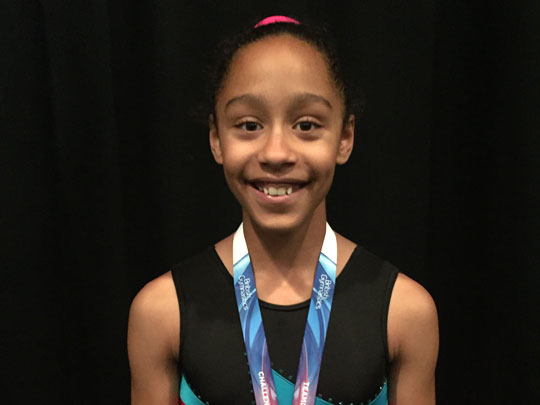 Following in her sister Amelia’s footsteps, Victoria in Year 8 competed at the British Gymnastics Championships at the end of July, coming back with a bronze medal!

The British Gymnastics Championships took place in Liverpool, and she competed with her team from Heathrow Gymnastics Club.

She did three runs on vault and trampette and three on tumble, to claim the British bronze with a score of 24.4, only 0.1 behind silver and 0.6 away from the gold medal.

My current team hadn’t been together very long so I really wasn’t expecting to medal, and was so proud to come home with a British medal in the end.

She has now moved clubs and will be training with and competing for Reddam Gymnastics.

There was also medal success for Victoria in Year 8, who won a @BritGymnastics bronze at the Championships in Liverpool – congratulations! ‍♀️https://t.co/bbomMXc4Ng pic.twitter.com/iOACS8qO90