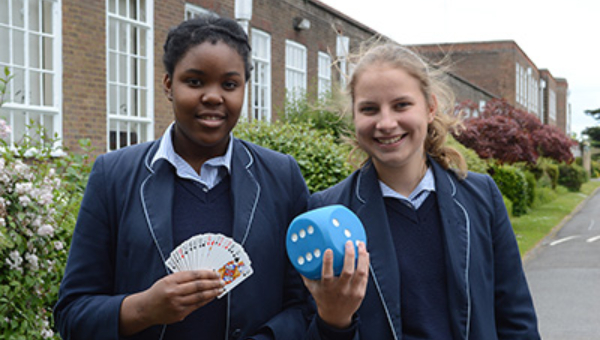 Two of our Year 9 pupils, Safia and Abie, have won the prestigious Bill Bryson Prize for Science Communication.

Their video ‘What are the Odds?’ won best overall entry in the competition, beating over 500 entries to impress the final judging panel consisting of Bill Bryson, Robert Parker (CEO of the Royal Society of Chemistry), Gill Reid (Professor of Chemistry at the University of Southampton), Paul MacLellan (Deputy Editor of Education in Chemistry) and Ben Valsler (Digital Editor of Chemistry World).

The theme for 2015 was ‘ Chance’ and students could write on anything from the Big Bang to evolution, probability to penicillin. Abie and Safia came up with the idea of a humorous video presentation convincing viewers that despite what they might think, each person is pretty interesting when it comes to the statistical chances involved in his or her birth and survival thus far in life.

The girls’ winning video is based around the idea that a person may feel quite boring but the fact that they have been born, survived and still exist to be watching this video on YouTube is actually quite a miracle statistically.

The girls will collect their £500 prize and two signed copies of Bill Bryson’s book ‘ A Short History of Nearly Everything’ from Bill Bryson himself and the Royal Society of Chemistry’s President Dominic Tildesley at a special prize-giving ceremony on July 7th at Burlington House, London. Their winning entry will also be posted to The Royal Society of Chemistry’s website.