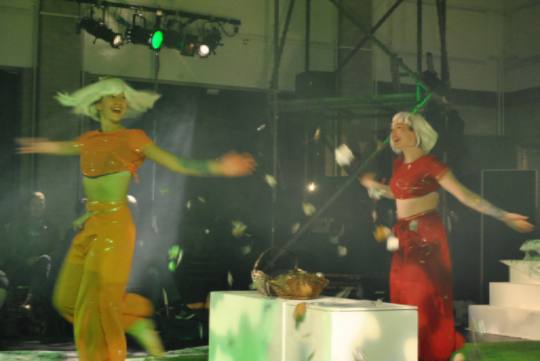 Lord what fools these mortals be!

On a Midsummer's night, four young lovers wonder into a forest in search of love but are met by an enchanted wood where fairies lie and spirits roam.

From the 8th to 10th November, RMS put on Shakespeare’s A Midsummer Night’s Dream with a futuristic twist, accompanied by a soundtrack of hard-edged synths and newly composed music by Mr Brammeld. The concept of the play was ‘transforming the power of love’, which was controlled by the Pucks manipulating the mortals. We took the meaning of ‘transforming’ very literally, by creating a monotone world and turning it into a colourful Utopia. By ripping up the set, lighting and colour changes, creating a sense of magic in the atmosphere, we created the fairy world run by Oberon and Titania. Moreover, the added humour of Nicki Bottom transforming to an ass and the audiences response of her song, showed how we keep the audience entertained throughout.

Due to the addition of the contrast of the monochrome to the bright costumes, set and lighting, it created more freedom for the lovers to explore themselves and along the way finding love, when the Pucks allowed them to. The show was a huge success due to the hard work from the actors and the crew behind the scenes.

The cast had a huge responsibility of learning such complex Shakespearian and as a result, made some members of the audience say that it was the best adaptation of the play they had ever seen.

The long monologues and complex pronunciation showed the level of skill our actors have. Each person involved put all their effort to create such a professional and impressive production and I think we executed this perfectly.