Year 8 and 9 Trip to the Rhineland
Skip to content

Year 8 and 9 Trip to the Rhineland 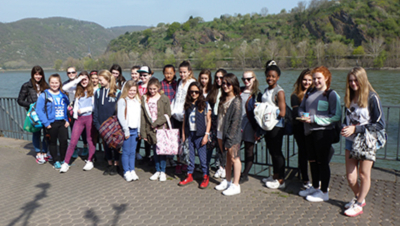 Over the Easter Break, 22 Year 8 and 9 girls, accompanied by three teachers, set off for a short trip to the Rhineland.  Read Faye's account of the trip below:

On Wednesday 15th April 2015 at 7.30 AM 22 very excited girls and 3 equally excited staff met in the RMS car park.  We all got on the coach and off to Germany we went! The journey on the ferry was quite exciting for some people as they had not been on a ferry before! We all got back on the coach and then we drove off the ferry and into France. We drove through France and then into Belgium then the Netherlands and finally into Germany.  When Miss Lomax told everyone that we were finally in Germany everybody became very excited.  When we eventually got to the hotel we had a late dinner then we were given our rooms and went to bed.

On the first day that we were in Germany we visited a town called Boppard and Sankt Goar, where we could do some shopping and visit the world’s largest working cuckoo clock. We then went on a Rhine river cruise and had the opportunity to see the sites of the Rhine including The Lorelei and numerous medieval castles. When we reached Assmanshausen we went on a chairlift, where we had a fantastic view of the Rhine from the air! When we got to the top we found some baby deer, which we were allowed to feed. The Deer were really cute and this was an experience enjoyed by girls and staff alike.  Once we had finished feeding the deer we went on a walk through the woods towards the ‘Niederwalddenkmal’ – a statue to commemorate the founding of the German Empire after the Franco-Prussian war in 1871.  We then went to Rüdesheim, a traditional German town,  where we were able to sample  Schwarzwälderkirschtorte (black forest gateau), Apfelstrudel and Waffles.

On the Friday we had a tour of Marksbourg Castle.  Of the 40 hill castles between Bingen a and Koblenz , the Marksburg was the only castle, which was never destroyed. The tour was very interesting and we got to see some old fashioned torture instruments. We then drove to Koblenz and did some shopping and got to sample ‘Spaghettieis’. After this we went swimming at the local leisure centre.  This was a lot of fun as there was a huge water slide that everybody enjoyed going down.

On the Saturday we went to Phantasialand, which is a theme park in Germany.  Everybody had been looking forward to this day as Phantasialand has some of the best rides.  After this day everybody was very exhausted and we went back to the hotel to have a typical German dinner of Schnitzel.  We then had an early night as we had to get up extra early in the morning so we could leave Germany to go home.  Everybody had a great time and it wouldn’t have been possible if it wasn’t for the staff who gave up some of their holiday to take us.