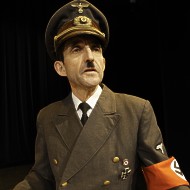 This week Year 11 historians attended a lively show which debated whether Hitler was guilty of being a war-monger right from the start.

As well as taking part in an exam-busting workshop students watched a play which reconstructed the 'trial' of Hitler.  Pupils listened to a range of witnesses from the Weimar and Nazi period in order to reach a verdict of 'guilty' or 'not guilty'.  We welcomed guests ranging from a member of the Freikorps to a 'Swing kid' from Nazi Germany- he even gave us a little jazz dance!

Hitler was deemed by the court not to be guilty of harbouring war from his early days but he did meet a tragic end when a protestor entered the court room and shot him.  This took everyone by surprise and Hitler died a dramatic death straight in the laps of Mr Grogan and Mr Jones.  A shocking but memorable end to our trip!