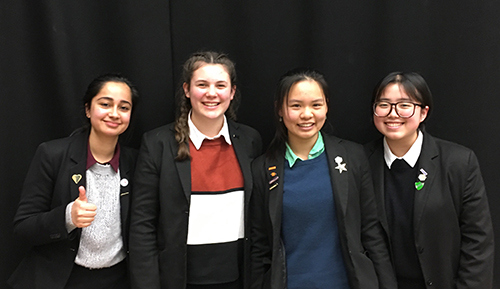 Last Wednesday, Mrs Cubbon, Cheryl, Annie, Rachel and I set out to Longdean School in Hemel Hempstead to participate in an adrenaline-fuelled afternoon of Maths.

The UKMT Senior Team Maths Challenge consisted of three rounds in which we encountered not only problems of a higher level than usual, but also new methods of solving them collaboratively such as working in pairs on the crossnumber (a numerical crossword), with one pair having just the down clues and the other with the across clues, or relaying answers between pairs in the shuttle round to solve the subsequent question.

I am very proud of our team's performance, especially because we were up against schools that had rigorously prepared for this. Ultimately, it was also a good chance for me to get to know fellow mathematicians in Year 13.

This was an incredibly fun experience, I have never felt more zealous doing maths and am very grateful to have had the opportunity to take part. A big thank you to Mrs Cubbon for organising this trip!