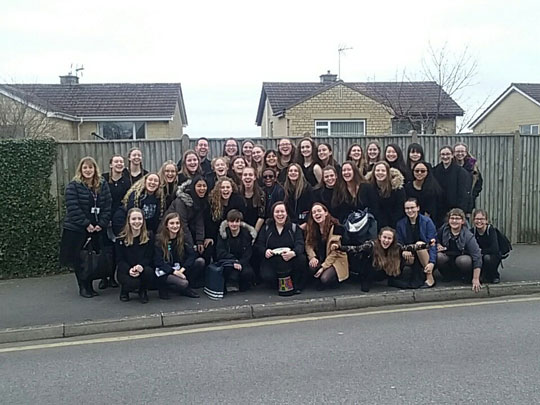 On Wednesday 20th March RMS Voices travelled to Bath to compete in the Female Voices category at the Mid-Somerset Festival.

The choir were required to sing two contrasting items in three or more parts with a total performance time of no more than seven minutes. They began their programme with Lee Kesselman's arrangement of the traditional Scottish folk song The Skye Boat Song, and concluded with the Zulu folk song Jabula Jesu arranged by Stephen Hatfield.

The choir was competing against Marlborough Youth Choir and Westonbirt Chamber Choir, both of whom gave excellent performances. The adjudicator – Michael Johnson – remarked that RMS Voices produced:

…outstanding interpretations of both pieces. The phrases were carefully balanced and the choir produced a fine, bright tone. The part singing was very secure and there was a most impressive range of dynamics.

When commenting about our second piece in particular he remarked that:

The choir was fully engaged in this totally convincing, vivid interpretation.

RMS Voices were awarded 90 marks out of a possible 100 and, better still, first place in the category. We returned to school with The Muriel Davies Salver which is presently on display in the entrance to the Old Mark Hall. If you would like to hear the choir performing their competition pieces then we invite you to attend the Senior School Spring Concert at RMS on Wednesday 3rd April.