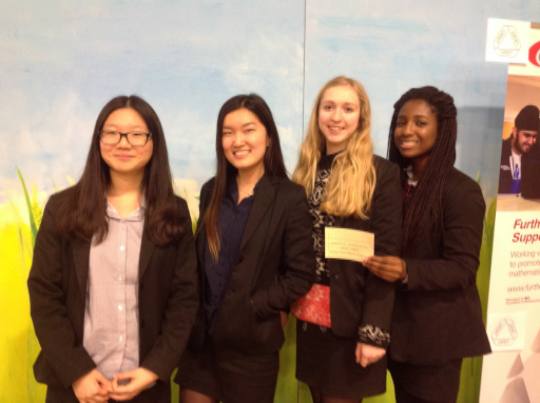 The UKMT Senior Maths Challenge was a fun day where the four of us worked well altogether as well as in pairs to complete challenging questions which required us to think outside the box.

The first round were simply ten questions worth six marks each which needed a variety of skills and techniques in order to solve them. Chineme and I worked together of the first two questions we came across and then worked individually on the subsequent questions we attempted. Jenny and Esther did the same, and when we had an initial answer to all questions, we individually checked the questions we hadn't done the first time around and then after that we discussed all of the questions and talked about our different approaches until the end of the allotted 40 minute time limit.

The second round was the cross number round. This was a crossword type grid where all the answers were numbers. One pair had the across clues and the other pair had the down clues, and many clues were reliant on an answer from the other pair. In addition, no communication was allowed between the pairs other than asking the teacher sat with us to pass on a message regarding which answer you needed. For this challenge Esther and I worked together on the down clues and Chineme worked with Jenny on the across clues. We performed well on this only dropping three marks out of a potential 57.

The third round was the lightening round, which gave eight minutes to complete four questions, of which, the final three were reliant on subsequent answers from the previous question. We worked in the same pairs as before for this receiving either the first and third question or the second and fourth question. There were four lots of four questions for this and on the second lot of questions, with 17 seconds to go, Esther and I passed the answer to Jenny and Chineme and Jenny was able to complete the question and write the answer in correctly with 2 seconds to spare.

In the end, we came 5th out of 21 schools. It was a very enjoyable day which expanded our perspective and stretched our mathematical ability.