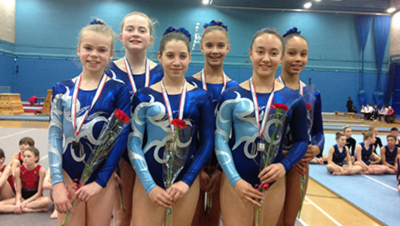 Another hugely successful weekend for RMS Gymnasts, who were competing at the Nationals for Acro, and floor and vault.

The whole team performed incredibly well, and special congratulations to to  Charlotte C and Freya W who were crowned Under 11 Pairs National Champions!

In the U14 pairs Molly C and Ashley C came 3rd and in the U19 pairs Serena and Miranda C came 4th  narrowly missing out on 3rd place by .05 point!.

As a region the U14 Eastern region came first and therefore the U14 girls also gained a medal and shield.

Well done to all the girls.