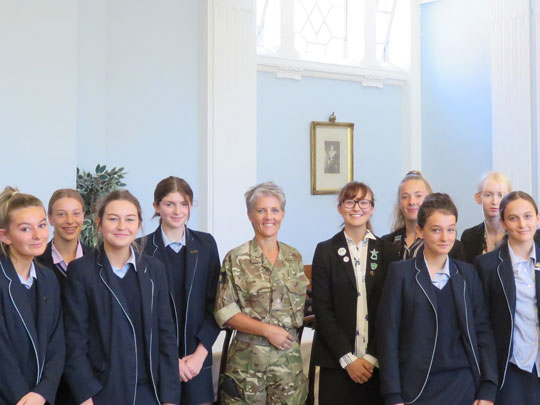 On Friday we were delighted to welcome Major General Sharon Nesmith to RMS to meet students and speak in assembly.

Major General Nesmith was the first woman to command a British Army Brigade, in 2014, and she is the now the most senior woman in the Army as well as the first serving woman to sit on the Executive Committee of the Army Board.

Major General Sharon Nesmith is announced as the Army’s first female Personnel Director. Chatting to two #RawRecruits, the General said, ‘I’ve become the mentor I never had… now I’m DPers, what changes would you like to see me make?’ #IWD2019 #thisgirlcan pic.twitter.com/A1CHUEOEgv

She had lunch with students from the Army Cadet Force at RMS, sharing her experiences and advice while hearing from the students about their own.

Afterwards she addressed the whole of Senior School in Friday Assembly, and told the story of how she had ended up joining the forces, from competing with her brother and taking part in the Duke of Edinburgh’s Awards programme, through to university and then Sandhurst.

Discussing her current role as Director of Personnel, she made clear that people are at the heart of the British Army, whatever their position, whether humanitarian operations, cyber threats or anything else.

She described her career so far as hugely rewarding, and encouraged the students to see the opportunities in front of them rather than the barriers, and to have role models but also to be prepared to be the first. She also emphasised the importance of valuing those around you and being there for each other, as well as worrying a little bit less.

Finally, Major General Nesmith also answered questions from students in different year groups, including what job she would have done if she had not gone into the Army, what different kinds of jobs are there in the Armed Forces, and also whether she had ever had an experience where she felt less valued than a man.

During assembly we also got to hear from Lucy and Lottie who are part of the ACF at RMS, explaining what this entails and encouraging other students to get involved.

You can also read Lottie’s thoughts about the visit below:

I find it truly inspiring how Major General Nesmith has achieved so much in the British Army despite the challenges she has faced. Around twenty of us were lucky enough to have lunch with her, where we got to ask her questions and hear a bit more about her journey in the army. During her fascinating talk at assembly, we heard about how dramatically the British Army has changed since she joined, as it heads towards gender equality. Not too long ago, women could only have administrative roles, but since last year they can now apply to any military role. She stressed how she always tried to see opportunity past any constraints, and how this helped her to succeed in a male-dominated career. I really enjoyed hearing from Major General Nesmith and it was a fantastic afternoon overall.

We would like to thank Major General Nesmith for coming to visit us and inspiring our students whether they are hoping for careers in the Armed Forces or not.