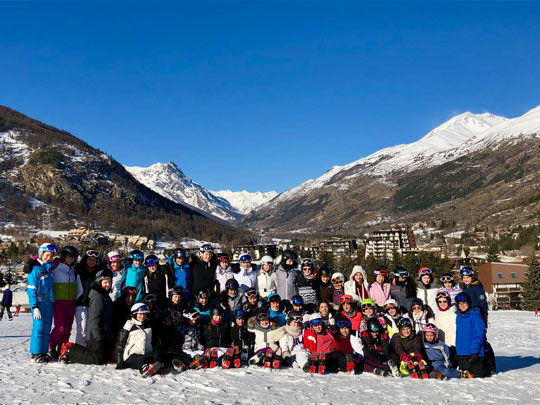 While most of the country was fast asleep, 49 inconceivably energetic pupils from Years 7 to 9 along with 5 members of staff were all in school at 3.15am on 29th December.

Fortunately they were not here for any overnight studying, but gathering for the start of the Lower School ski trip to Serre Chevalier in the French Alps.

After a not-at-all-brief journey – coach to Gatwick, flight to Geneva, long coach transfer from Switzerland via Italy to France – we arrived at the hotel late in the afternoon, greeted with a warming cup of soup and French bread.

All that was left to do that evening was to get our boots and skis fitted, collect a helmet, have a quick tour of the town, and then chill out to recover from the travelling!

The following day also started early – although thankfully much later than the day before – with a hearty breakfast while the sun gradually rose in the sky.

The girls were divided into five groups according to their ski experience and assigned an instructor from the ESF – Ecole du Ski Français.

While some girls had never skied before, and others had only done so in a snow centre before, even the experienced skiers needed to warm up and get used to moving the right muscles again.

Thankfully the sun was bright, the skies were blue, and there was enough powder remaining from the last snowfall, so conditions were excellent for getting back into the swing of things.

That evening during free time after skiing, pupils had the opportunity to make the short walk into the town centre where they could do a bit of shopping or grab an authentic crêpe, but most of them headed straight to the mini-supermarket of all places!

Following dinner at the hotel, we got to enjoy the first activity laid on for us by the Skibound staff at the hotel – a winter challenge on the snow including army crawling, bunny hopping, and of course lots of noise!

Well done to the winners of our winter challenge last night, which included lots of army crawling and bunny hopping! #RMSSki2018?? ?? pic.twitter.com/pZyPYtiGyo

The unseasonably warm weather continued for our second day of skiing, which was also New Year’s Eve.

Following the day’s ski lessons, as the sun was starting to set, we took a short walk past the cable car station to the base of the black run Casse du Boeuf, for a New Year’s Eve celebration party described by Maria from Year 9:

Our instructors alongside their colleagues skied down a black run in the darkness, holding lights that made up the colours of the French flag, the Tricolore. After this wonderful display there was a series of amazing fireworks, which has to be the best fireworks display I have ever seen! I definitely recommend this trip to the girls in Years 7-9 as I had a fantastic time.

After dinner we also got to try out sledging/bum-boarding which certainly got the adrenaline flowing!

Afterwards the girls were given the option to either stay up until midnight to celebrate the New Year in the common room, or to head up for a quiet early night.

While quite a large number originally intended to see in the New Year, many of those ended up turning in early, tired from all the skiing; nevertheless a few did manage to stay the course, and got to watch another great set of fireworks from the common room.

New Year’s Day started the year with yet more beautiful sun – the beginner group kicked off 2019 by successfully ascending their very first chairlift, while the most advanced group got to practise doing jumps in the snowpark, and speeding down the boardercross.

And here they are catching some air in the @SerreChe_EN snow park yesterday! #RMSSki2018 ? ?? pic.twitter.com/gY0HgPEvPG

That evening's activity was ice skating, which everyone enjoyed in spite of the uncomfortable boots!

Unfortunately this activity produced the most injuries of the week, so it’s a good job we made sure everyone wore their helmets! Nevertheless, two staff had to accompany two pupils down to Briançon hospital, which the girls coped with admirably.

Fortunately the beautiful sunlight continued until lunchtime, so after the morning lesson a photographer was arranged to take our group photo at the base of the slopes, as well as individual action shots of each pupil.

The evening activity comprised a set of taskmaster-style challenges, including comedic poetry, the best cow impression, and teams of two having to carry an orange around the pool table between their heads!

The competitiveness continued with the following evening's activity, a snow sculpture contest.

The winning sculpture was a detailed mermaid’s tail, and the runner up was a high-tech snow car with a great advert performance!

Lots of creativity on display in the snow sculpture competition last night – well done to everyone, but particularly our winners with their mermaid tail, and the runners-up with their snow car! #RMSSki2018 ?? ?? ?? pic.twitter.com/IhwQAE2xIx

By the final morning of skiing even our beginner group had made it onto a black run (which may have crossed over a green run!).

Following the afternoon lesson everyone headed back to the hotel along with our five ESF instructors, for a ceremony to give out certificates and badges, with different levels according to how well they had done over the week.

Each group had also bought a gift and card to give to their instructor to thank them for a great week of teaching! As Georgina in Year 8 said:

The ski trip we went on in the Christmas holiday was a great experience, the instructors were great and so many people started not even having skied before in mountains and by the end of the week were on blacks.

A great final day of skiing to bring our amazing week in @SerreChe_EN with @SkiBoundSchools to a close! ? ?? pic.twitter.com/yK7wE9ighT

After a final lesson from our excellent @UKesf instructors this afternoon, everyone received certificates and badges to show which level they had reached over the week – well done! #RMSSki2018 ?? ?? ? pic.twitter.com/LZ3Y7VSw9B

The rest of the afternoon and evening was mostly spent sorting, packing and tidying, other than a fiendish quiz, after which the pupils also gave some lovely gifts to the staff to thank them for the week.

It was an early night because everyone had to be up at 4.00am to start the long transfer back to Geneva, but at least this time it was dark outside so most people could go back to sleep on the coach.

Unfortunately the flight was delayed by two hours, but we made it back to RMS in daylight for the girls to be welcomed back by parents, siblings and even dogs!

Here’s a final reflection on the ski trip from Nina in Year 7:

I loved the trip, as it gave us many experiences. The hotel that we stayed us was really cosy and provided us with lots of delicious food! The ski reps and hotel manager would help us out and make sure our stay was as fun as possible, as well as the teachers. The instructors taught us lots of new things and gave us adventures on the piste. I found the trip amazing and I think the school should continue doing it. Thank you to all the teachers who made this a possibility.