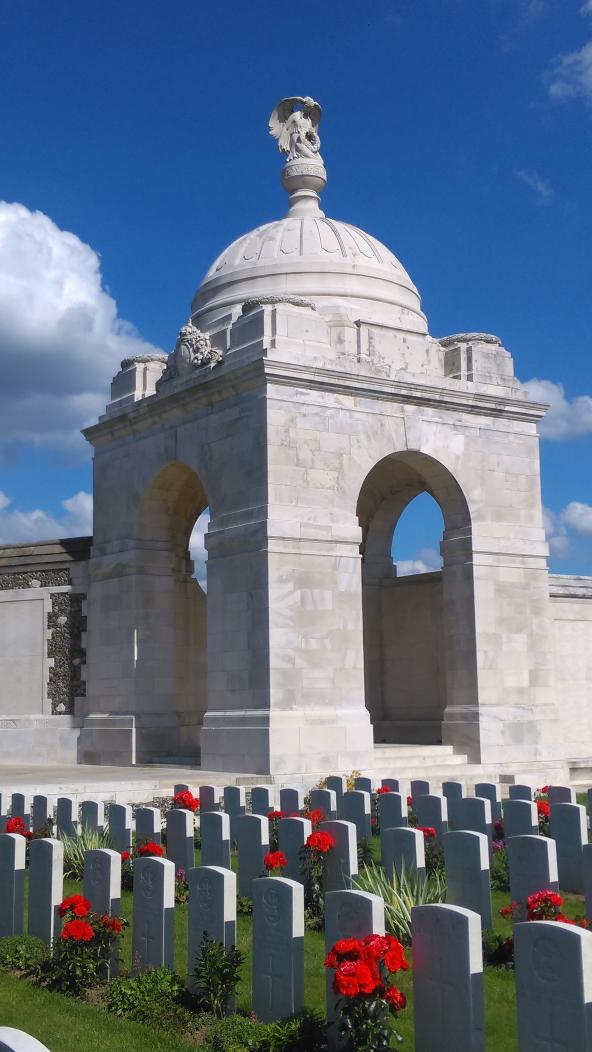 Last weekend a group of 35 Year 9s had the opportunity to visit the Battlefields of the First World War in Belgium and France. This would allow them to enrich their understanding of this period in history and visit sites where trenches were dug, battles were fought and heroes were made.

Jacques, our guide, took us around key sites near Ypres and was impressed with how much we knew and how much we could work out about the choices behind soldier positions and tactics. We first visited Bayernwald, a series of German reconstructed trenches, and could see how they contrasted with the British and ally trenches, notably as they used woven willow branches to line their trenches rather than metal sheets. Jacques then took us to Langemark German cemetery, which was in stark contrast to those British and Commonwealth cemeteries that we had been driving past, which all appeared bright and uplifting. Langemark contains a number of mass graves and highlighted the anger and resentment felt following the end of the First World War. A

fterwards, we travelled to Tyne Cot in order to hold our remembrance service to the Old Masonic School Boys. We gathered in an alcove and stood in a circle to read our Act of Remembrance. The teachers read out the service and then the names of the 112 teachers and students whose names are on the memorial along the chapel corridor and each time a name was read out the students placed a red carnation on the ground. We would like to thank FORMS for providing the red carnations for this memorial and Maria and Josephine for reading the poem at the end of our service. To see so many red carnations lying on the ground provided a vivid image of the loss experienced due to this war. That evening we attended the Last Post service at Menin Gate, which is held every evening at 8pm and heard a visiting choir singing songs to the fallen, which added to this sobering experience. A number of us had relatives listed on this memorial and so took the time to find their names and pay our respects. This was certainly a touching end to what had been a moving day.

Our second day began with a visit to the Wellington Tunnels in Arras, an underground museum which was founded to the memory of thousands of men of the British Army and Dominion Forces who lived and worked under the city during the First World War. It particularly commemorates the tunnelers of New Zealand, who used hand picks to enhance this extensive underground system so that the enemy would not heard them at work. We were shown a number of features, such as; mining trucks, equipment, food and drink containers and the latrines! There are also examples of ‘graffiti’, that has survived over 100 years and are examples of soldier’s perspectives during this time. At 11 degrees and with water dripping from the ceiling it is hard to believe that for many days soldiers lived in these networks, preparing for their attack!

In the afternoon we visited the Thiepval Memorial, the largest of the memorials to the missing men of the war. On the panels of the arches are the names of those who have no known grave and are thus ‘the Missing.’ There are over 70,000 names on the arches of men who died in the Battles of the Somme, with some blanked out if their remains have since been found and so an individual grave given. Afterwards we visited the Ulster Tower, a memorial to the men of the 36th (Ulster) Division. At the entrance to the tower is a plaque commemorating the names of 9 men of the Division who won the Victoria Cross during the Somme. There is also an inscription which reads:

"This Memorial is Dedicated to the Men and Women who at the call of King and country, left all that was dear to them, endured hardness, faced danger, and finally passed out of the sight of man, giving up their own lives that others might live in Freedom.”

The men who ran the site told us about the underground mining that had been done during the war and how some local cemeteries have to lay the gravestones of the soldiers flat because they have begun to sink. We finished by visiting La Boisselle, which is situated at the heart of what had been the Somme battlefields. We learnt that during the war it had reached stalemate between both sides on the surface and so they began searching beneath their opponent’s trenches in an attempt to gain an advantage. In December 1914 French and British engineers had begun tunnelling beneath this region and placing explosive charges. This particular crater was made by a gigantic underground mining explosion which had been sprung on the 1st of July 1916, the first day of the Battle of the Somme. The crater has been preserved as a lasting memory to this war and the men who died. A service is held here on the 1st of July every year.

On our last day we visited ‘In Flanders Field Museum’, in the centre of Ypres. The museum is full of interesting artefacts, including a recent exhibition of empty chairs from all countries who fought in the First World War to reflect all those families who had an empty chair at home as a result of the casualties of war. Its layout is intentionally designed to make the visitor feel uncomfortable and this adds to the atmosphere. Having visited the museum we stocked up on Belgium chocolate and travelled to Hooge Crater Museum for our final visit of the trip. This museum contained a huge array of artefacts from the First World War and included a video clip that outlined how the surrounding area had changed as a result of the First World War. The manor house that once stood there was destroyed and the landscape was visibly scarred from the fighting.