Head’s Blog: The pillars of the RMS community
Skip to content

Head’s Blog: The pillars of the RMS community 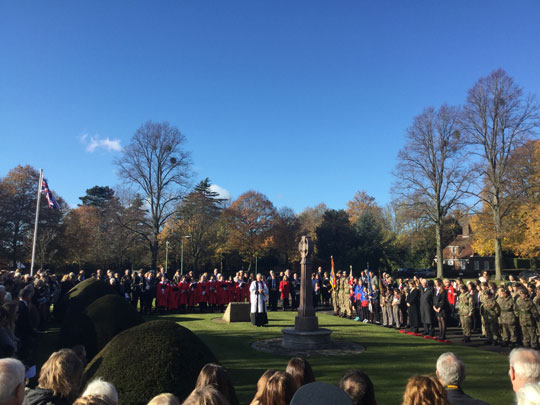 Our Inset Day at the start of this academic year began with a brilliant quotation from George Bernard Shaw:

“I am of the opinion that my life belongs to the whole community, and as long as I live it is my privilege to do for it whatever I can. This is the true joy in life, the being used for a purpose recognised by yourself as a mighty one; the being a force of nature instead of a feverish, selfish clod of ailments and grievances complaining that the world will not devote itself to making you happy.”

A great quotation that served as a reminder, if one were needed, of why we commit our working lives to serving the present and past community of pupils, parents, and staff at The Royal Masonic School for Girls.

RMS is a most incredible community and that fact has been in evidence as ever throughout the last week or so. Our FORMS parents organised a spectacular fireworks display enjoyed by many from the RMS community and beyond.

Great fireworks earlier at the FORMS display, despite the weather! Thanks @RMSFriends pic.twitter.com/UAD6iq5KBE

This was followed by a Remembrance Service last Sunday that was led superbly by Reverend Quill to a packed Chapel containing former pupils from both RMS for Girls and The Royal Masonic School for Boys.

Chapel Choir sang beautifully, the readings by pupils and alumni were filled with meaning, and the personal reflections of retired Colonel Richards (a Year 3 parent) were so touching, and were delivered with such grace, that the congregation was moved to spontaneous applause as an immediate indication of the strength of emotion we all felt in response to his words.

Service of #Remembrance led by @rmsrev taking place in our Chapel, wonderfully decorated for the occasion with garlands of #poppies created by the whole school community. #RemembranceDay2018 #NeverAgain #armistice #WeWillRemember pic.twitter.com/4O62hUB74a

Mrs Elder, our Head of RS, then led a Chapel Assembly last week. She started with the theme of Interfaith Week, and its message of hope that people of different cultures and faiths can live side by side in peace and understanding.

But Mrs Elder also expertly led us to a message about our community, asking us all to consider how we each respond to the people in our community who are different from us. Do we simply push them aside, using words like “weird", "strange", "crazy", "stupid”, she asked, or do we take the time to try to understand?

Great to share some of the key messages of Inter Faith Week with all students in chapel assemblies this week. Excited to get thinking and talking about this more during the week! #InterFaithWeek pic.twitter.com/d0NQeAKANO

We were asked by Mrs Elder to question what we see in our community, and to seek to understand the "whats", "hows", and "whys" of others so that our picture of the world could become clearer.

It was a message of hope, of learning from the differences within a rich and varied community, and the message was received thoughtfully by the pupils in Senior School, who are of course themselves all questioning their identity, difference and place in the world as they progress through adolescence and young adulthood.

The large, varied and wonderful community at RMS has existed since 1788 and stretches back among the living to the former pupils who returned for the Remembrance Service from as far back as the 1930s and 1940s to see their school now, to visit their former houses and bedrooms, and to revisit the air raid shelter that Mr Lees kindly opened in order to bring back memories of those who spent evenings there throughout the Second World War. It was a special thought by Mr Lees to suggest this. We always wish the school to be a welcoming community to former pupils, parents and staff.

The morning's activities were followed by a lunch for our Old Girls, as well as Old Boys from the former RMS for Boys. There were also tours of the School, including our bunker used in WWII. #Remembrance pic.twitter.com/OYqy1zh9iU

Looking forwards, the redevelopment of former boarding house, Alex, is now well underway. We are really looking forward to the Faculty of Performing Arts migrating from its various dwellings around the school to what will be an outstanding facility and the school’s creative hub for music, drama and dance.

On Tuesday 20th November I will be welcoming those who have supported the project to our Benefactors’ Reception ahead of the opening night of Les Mis.

Without these individuals we simply would not have been able to make the plans for the new Faculty of Performing Arts a reality. I am extremely grateful to everyone who has contributed to the project and am eager to see the huge benefits that the new facility will bring to all of our pupils.

It was really exciting being taken around Alex House @RMSforGirls yesterday to see its fast-changing appearance as it begins to be transformed into our brand new Faculty for the Performing Arts. #readyforSeptember#whatourpupilsdeserve#everythingwewishfor pic.twitter.com/ctRD5vProj

Our Development and Alumnae Relations Office are keen to reconnect with RMS alumnae of all ages and stages. If you are an alumna, or if you have daughter(s) who have already left the school, we would love to hear from you. The Development Office will be co-ordinating a programme of events and opportunities for alumnae to support current pupils, each other and of course, purely social reunions.

We’re really excited about how our alumnae can inspire our current pupils and give them insights into the amazing opportunities ahead of them. The Development team would be delighted to hear from all former RMS girls via the form on the Alumnae page, or by contacting Lucia Hull, Development Manager, directly.