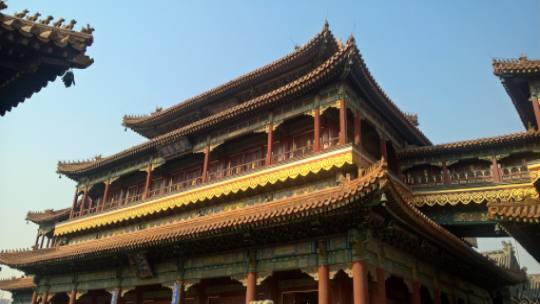 It's been another busy few days here in Beijing, with many of the fantastic sights having been ticked off the list.

The girls left school early on Thursday to visit the very impressive and slightly futuristic looking, Olympic Park. Friday saw a visit to the Lama Temple, a Buddhist temple and monastery in the Dongcheng District, followed by a fantastic Chinese Cookery Class, whereby the 4Rs were put to good use to produce batch after batch of meat and vegetable Chinese dumplings.

On Saturday the girls got a chance to shop in the Indigo Mall before venturing to the beautiful Summer Palace, the largest Royal Park in China. Saturday night saw a few competitive games of bowling.. and that was just the staff!!

After a well deserved lie-in on Sunday morning and a visit to our local bakery, the girls visited the Drum and Bell Towers at the northern end of the inner city. Originally built for musical purposes, they were later used to announce the time and are now popular tourist attractions. We watched an amazing (and very loud!!) drum show at the top of the tower.

Sunday afternoon was spent in the Beijing Hutongs,  old-style city alleys and lanes formed by rows of buildings structured around courtyards. It was here that the girls put their bargaining skills to good use, in Mandarin of course, purchasing all sorts of trinkets and gifts. They endulged in plenty of the local delicacies  and street food, including chaurn'r – skewers of roasted meat, mostly lamb. Overall, a jam-packed, but highly enjoyable weekend in Beijing! Now to bed early on Sunday night to start all over again tomorrow….

See some photos from the weekend below…