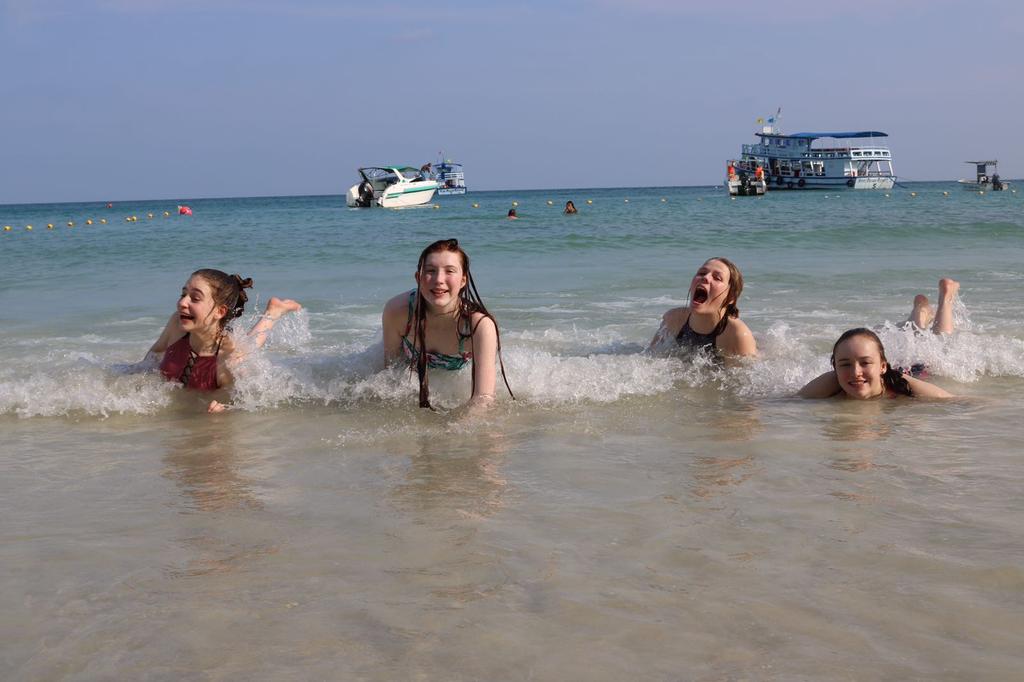 We were certainly ready to leave the island on Monday morning – you can have too much of a good thing….

Suitcases were packed, day bags packed and it was to be early lunch at 11.30  However, we had two hours before lunch so back we went to the beach for two hours of solid laughter, and fun.  When the boys saw what was going on, some of them abandoned their rooms and their games, and sitting beside the swimming pool, and James McNaughton (JLS) hired a swan for the boys.  You could say they had two hours of swanning around!

Out of the water at 11.00, final shower and I visited each room to check they had everything and to repack suitcases that could not be repacked.  A little folding goes a long way….

Lunch, and then on to the boat and back to the mainland, fast boat, into the coach and back to Bangkok.

Arrival at Mida Airport Hotel – very nice, big rooms for the girls and a team talk, unpacking and sorting out.  We went for a leg stretch to a shopping centre and the girls had an hour to look around – which they did and arrived back at the meeting point bang on time.  There was an awful lot of "stuff"in the shopping centre.  It reminded me of a covered Watford Market, surrounded by fast food outlets like "Korea Steak'(which didnt seem to sell much steak) and it had a super market at the back and their were cars on the top floor!  I am always intrigued as to how they get them into the building….

The supermarket was amazing in terms of the various fruits that were there, but they were huge and hard and cold, so I dont know whether there is a policy whereby you eat your fruit rock hard….. Pawpaw, mango, papaya, pineapples, watermelons, Sharon fruit, and some very interesting vegetables.  Saying that, last night I had "Morning Glory" stir fried vegetables last night, which was a hot mix which I swear had seaweed in it.

Back to the hotel, dinner with the girls deciding they wanted to sit together and the boys deciding they wanted to sit together.  The girls ate everything though I must confess that 50% went western for their food, but only in the shape of pan fried salmon.  The others decided on stirfried chicken with noodles, which Ella gamely worked her way through even though it took a while for to get used to the texture of the noodles which seemed like squares of very thin lasagna sheets…  Loads of hilarity but off to bed and not a peep.