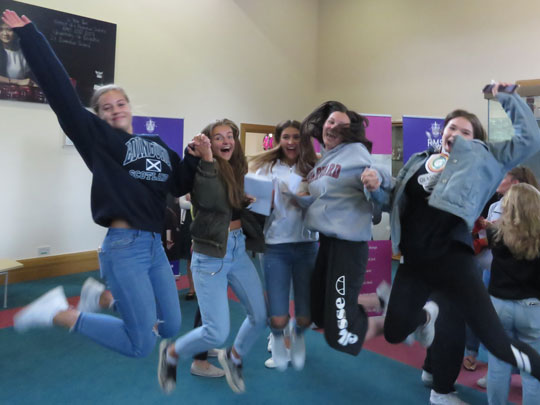 RMS for Girls’ pupils have attained an outstanding set of GCSE and IGCSE results. This year, pupils’ results were recorded in both the new numerical format of 9 to 1, and the old letter scale of A to G. One in five of all grades awarded were 9 or A*, almost two in five grades were A*, 9 or 8, which is the highest proportion of top grades that the school has attained, and 60% of all grades awarded were A*, A or 9-7.

A quarter of the pupils in the year group recorded the equivalent of 9 or more A* and A grades.

Performance was strong across all subjects, with exceptional percentages at grade 9 in the reformed subjects for Biology (45% grade 9), Chemistry (38%), Drama (40%), and Religious Studies (39%), and 47% of students awarded an A* in IGCSE History.

Headmaster Kevin Carson said “I could not be more proud of this group of students and their teachers. They have largely been following new specifications with fewer past papers and resources, yet the pupils have achieved incredible results. For almost 40% of grades to be awarded A* or 8-9 across 27 different subjects is a fantastic achievement in itself, and this is from a year group who participate in and achieve so much outside the classroom too. They really are a very special set of pupils. All of this hard-working year group can now look ahead with confidence to a fulfilling and happy couple of years in Hind House, and I know that Mrs Freeman and her team are excited and looking forward to the start of term in the Sixth Form.”

A full breakdown of results by subject can be found here.